The New Creatures of the Aberration 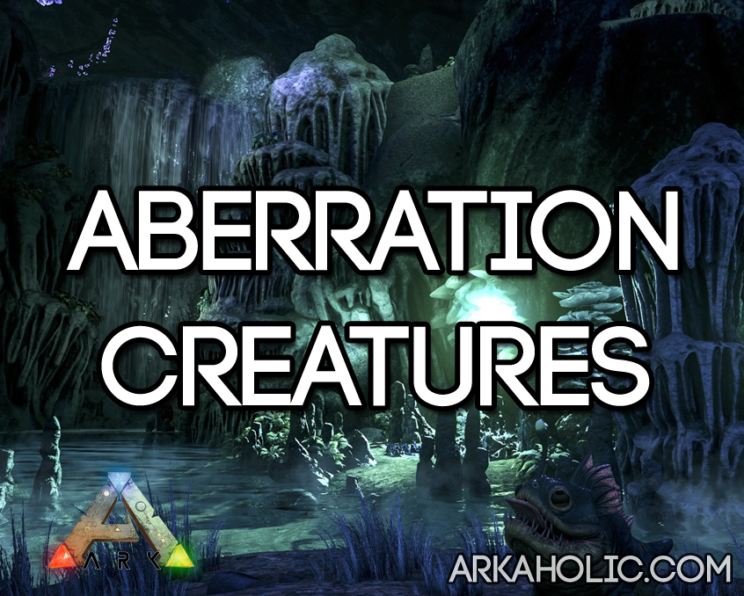 A part of the new Aberration expansion that came to ARK was a good amount of new dinosaurs! Here we will go through the new dinosaurs and you’ll get a sweet little taste as to what you can expect from each one. 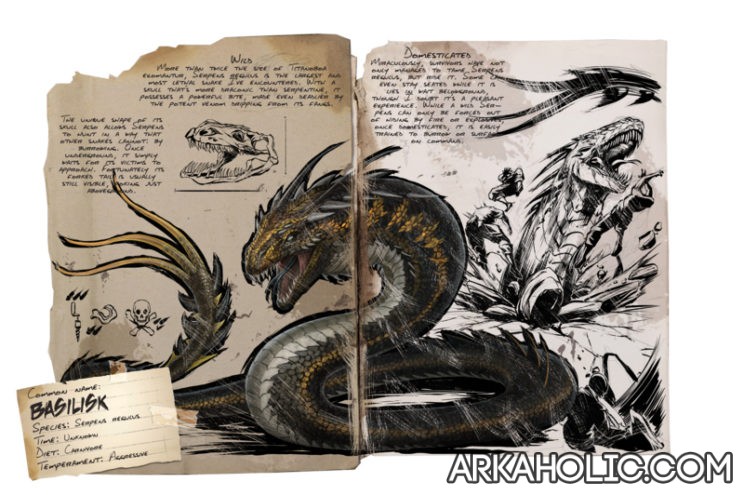 The Basilisk is an aggressive dinosaur that immediately will attack when it is spotted. The Basilisk hides underground waiting to get the best possible jump on its prey before attacking. The Basilisk is tamable and rideable when you tame it. The Basilisk requires you to be level 85 in order to ride it. 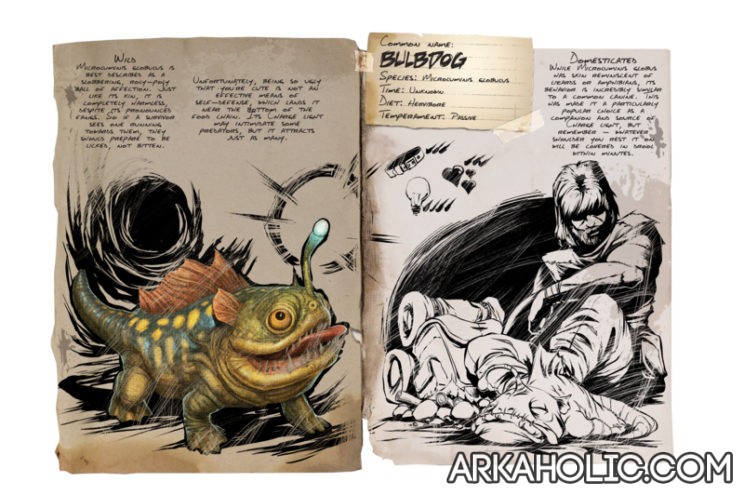 The Bulbdog is a passive creature and is often found lazily walking around the Aberration. It is tamed passively, but cannot be ridden once tamed. The Bulbdog can be carried by a person, which allows you to utilize its special ability wherever you please. The Bulbdog carries charge, which means that it will deter nameless ambushes, but will attract seekers towards you.

If you set your Bulbdog to active, it can detect enemy players in your area, as well as any nearby creatures that are the max level. The Bulbdog has a ton of relevant characteristics that most high level tribes will be carrying one around when they are out and about, so they do not get ambushed by Nameless. 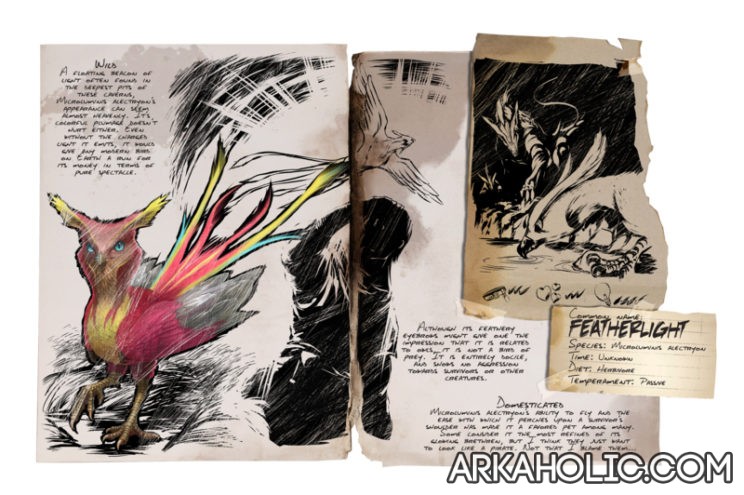 The Featherlight will not take any radiation damage, which makes it key for carrying into the radiated areas of the Aberration. 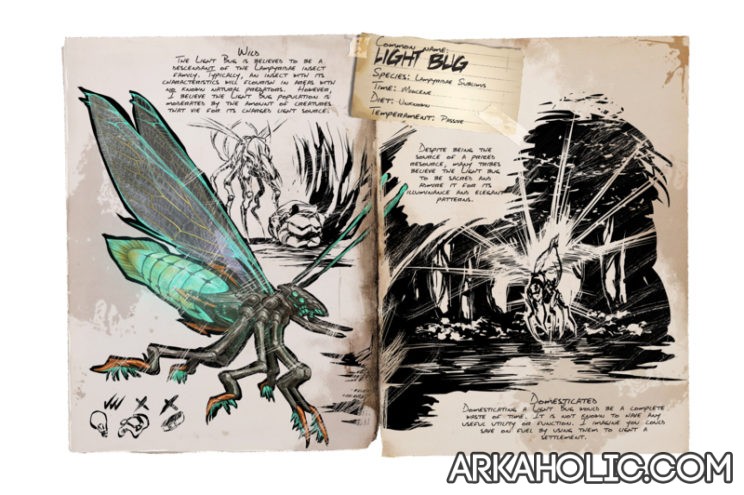 The Glowbug is a passive animal that will flee at the first sight of any danger. It holds up to 500 light charge, which you can steal from it. The Glowbug is not tamable, nor ridable, so its sole purpose is to be farmed of its resources. When killed, the Glowbug has a chance to drop Cementing Paste, Chitin, Raw Meat, and Raw Prime Meat.

If you approach the Glowbug, you can collect the charge from it by pressing E on your keyboard. You can have it fill either a charge battery, or a shoulder mounted pet that can have charge. 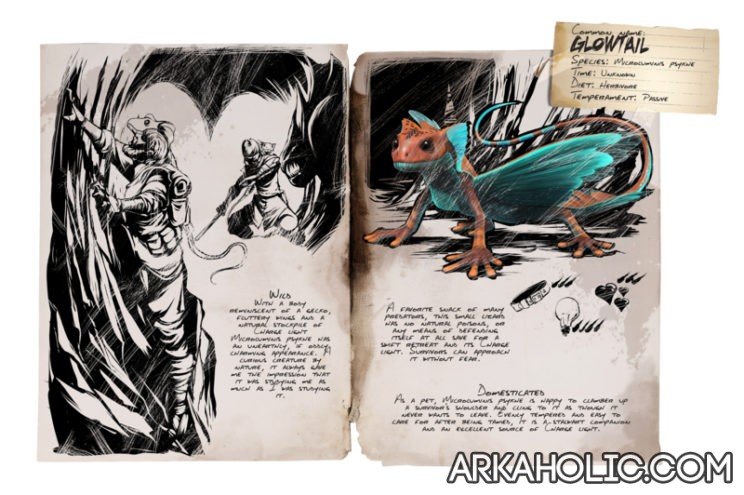 The Glowtail is a small creature, and is often found to be the lowest on the food chain in the Aberration. It is tamable, but it is not ridable. Much like the other small creatures found on the Aberration, it carries charge and can be shoulder mounted. The Glowtail provides the same resources as that of the Bulbdog, it is just found in a separate region. 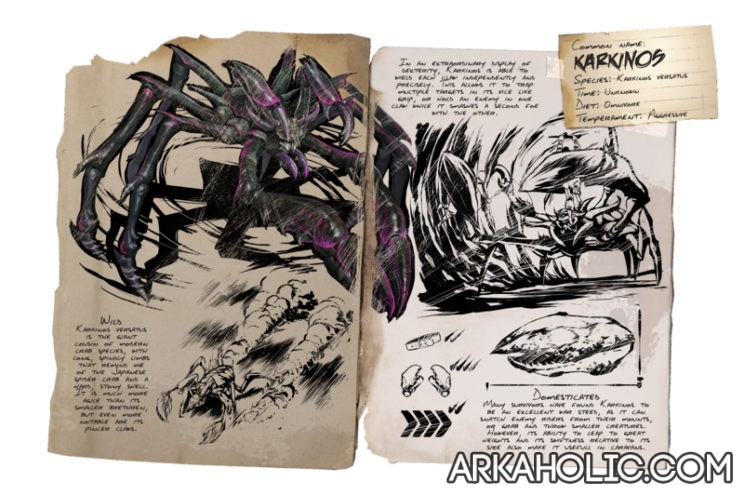 The Karkinos is a very large creature that represents that of a spider crab. It is known for having its long legs and claws.  The Karkinos is both tamable and ridable. It requires level 65 in order to craft the Karkinos Saddle. Killing a Karkinos has the chance to yield raw meat, chitin, and organic polymer. One of the most interesting parts about the Karkinos is what you are able to do once you tame it.

The Karkinos has the amazing ability to jump at great lengths, and pick up medium sized creatures. You can carry wild animals that are of medium sized to wherever you would like. This means you can easily transport and tame creatures back at your base where it is much more convenient. The Karkinos also does not have an oxygen stat, which means it can go underwater without ever needing to come back up for air. 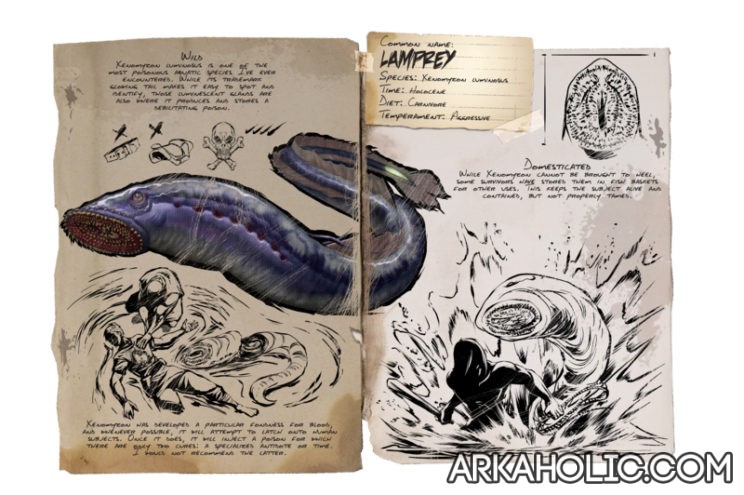 The Lamprey is similar to an eel, as it has a long body without scales and emitting electricity. The Lamprey is not tamable, nor mountable, but it is a good spawn to gather a lot of resources from. Killing the Lamprey will yield Chitin, Leech Blood, Oil, Silica Pearls, and Raw Meat. You can use a Lamprey for your own benefit by picking it up.

It will provide you with immunity to radiation as well as a charged light. This means that if you are in a radiated zone and do not have a Hazard Suit or a Charge Light with you, you can pick up the Lamprey and have one on the go. 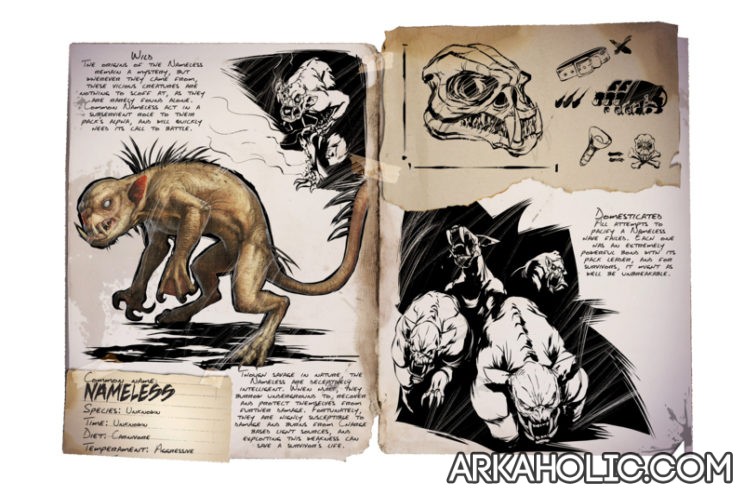 The Nameless is a very distinct looking creature. It resembles a monkey combined with a goblin of sorts, and has a distinct posture. The Nameless is extremely aggressive, and will always seek out survivors. You can protect yourself from the Nameless by having Charge Light. Killing a Nameless will yield you Hide, Raw Meat, and Nameless Venom. 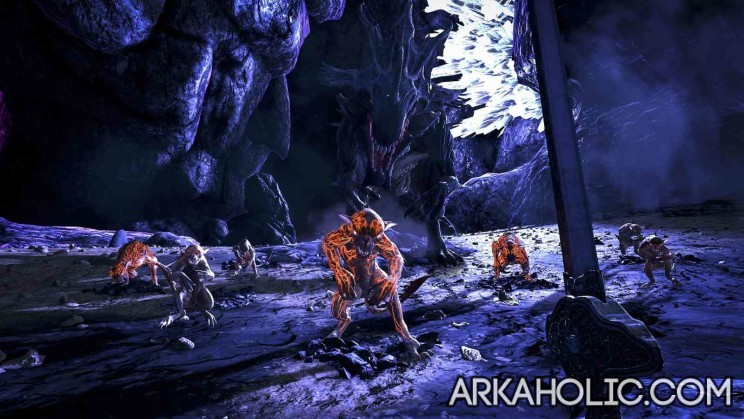 This Nameless Venom is important as it is used to raise baby Rock Drakes as well as summoning the boss of Aberration, Rockwell. They are extremely aggressive and powerful, so unless you have a charge light with you, you should be careful to avoid them while you are out. They are not tamable nor ridable. 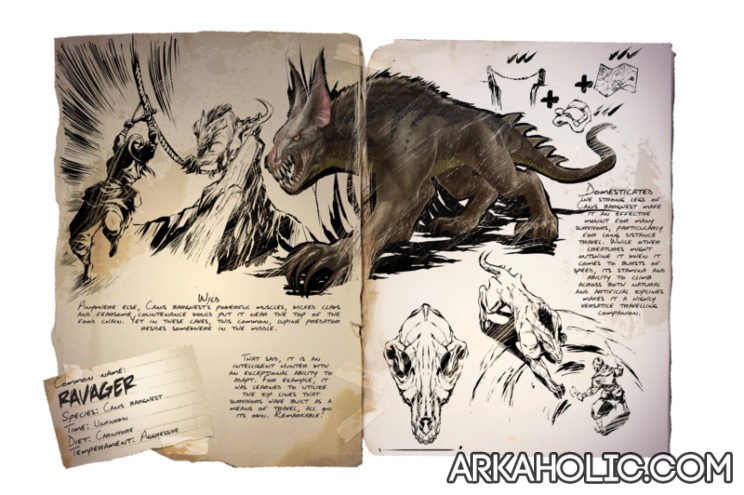 The Ravager is another creature of the dark. It is a hairless quadrupedal predator that lurks in the dark. It is large in size, and has large teeth and claws that can rip you apart if you are alone. The Ravager is tamable, as well as ridable. Once tamed, the Ravager can be used for a number of things. It has really good stamina, as well as speed, so it is a great mount to use for transporting your base, or for scouting out new areas.

The Ravager also has the ability to use zip lines, which means you have extra mobility while you are riding one.  The Ravager also halves the weight of wood, fungal wood, thatch, metal, green gems, fiber, crystal, obsidian, and stone. 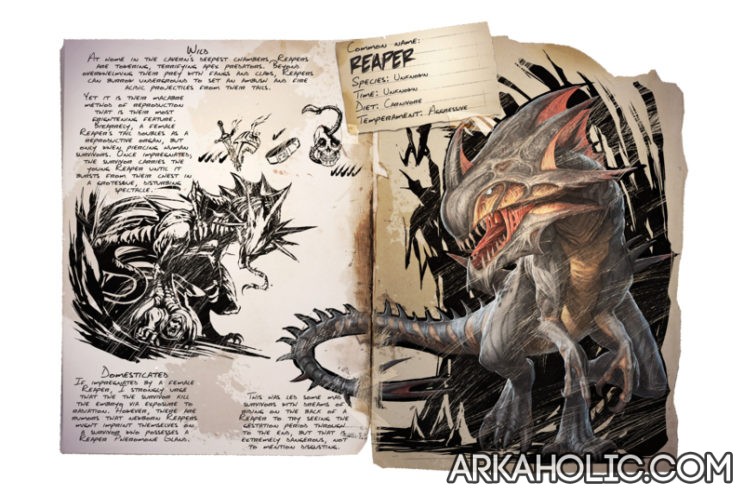 The Reaper is an extremely aggressive creature, and will only appear when an Alpha Nameless calls for them. They are large sized dinosaurs that cannot be mistaken as they have a distinct head with points sticking out from it. The Reaper is not able to be tamed as an adult, but you can when they are infants. You can also ride the Reaper. The Reaper is useful in the Aberration as it drops Reaper Pheromone Glands. These are used to summon the boss of the Aberration. 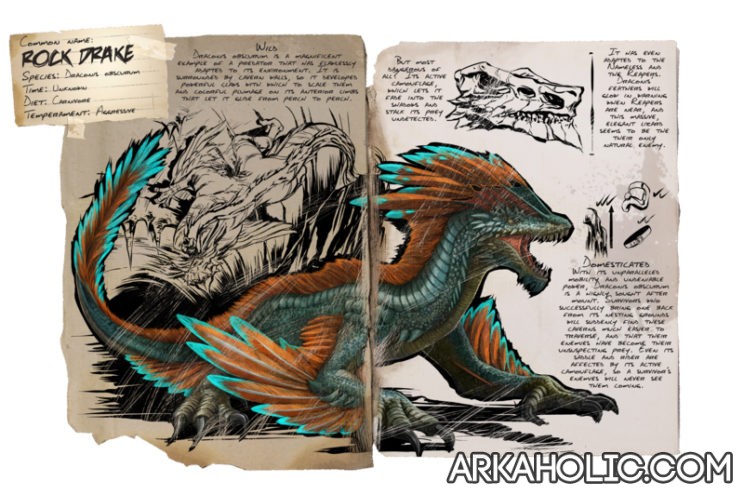 These Feathers are used as part of the process to summon Rockwell, the boss of Aberration. Although you cannot tame one in the wild, if you happen to find a Rock Drake Egg, you can hatch one and tame one from its infancy. Once you have one, they are a perfect travel companion. They cannot fly, but they are able to go up and down every surface, which makes them perfect for traversing through caves and other sketchy terrain. 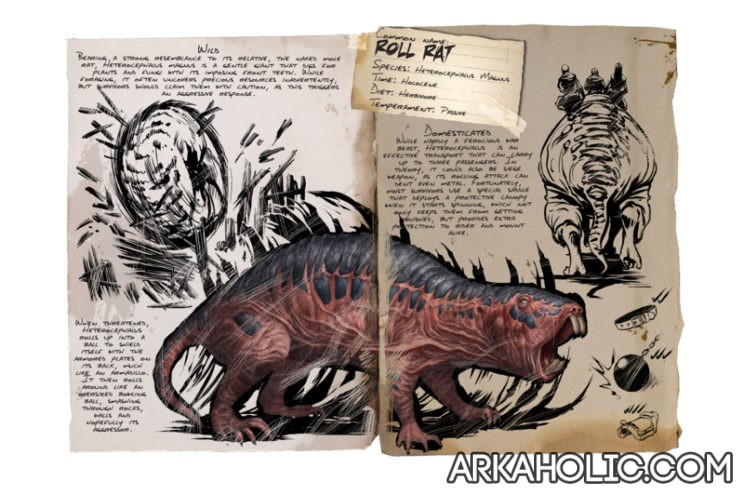 The Roll Rat perfectly resembles a Naked Mole Rat. It is a rather passive creature, and will not attack any survivors unless they attack it first. The Roll Rat is both tamable and ridable. The Roll Rat is one of the only creatures in the game that its saddle will actually lose durability when it is damaged in combat, this makes it a less than ideal companion, but it is useful in some respects.

For example, the Roll Rat can transport several people at a time by rolling. When you are riding the Rat, hold right click, and it will roll forward extremely fast. The Roll Rat is also useful for gathering Wood as well as mushrooms. 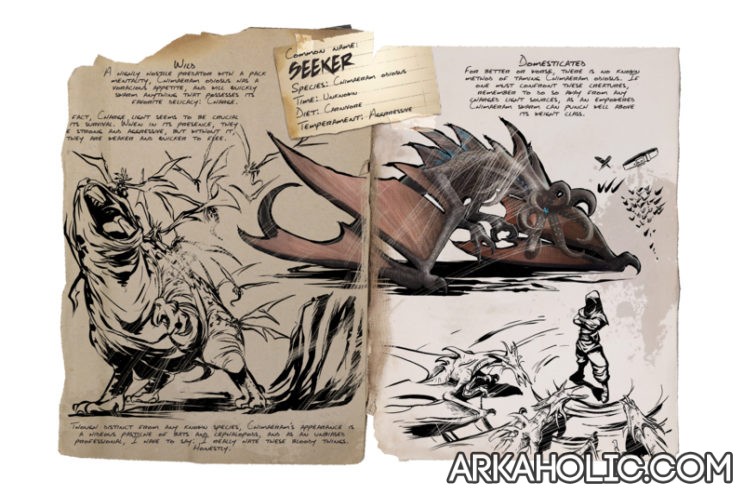 The Seeker is a small winged creature that has bird like legs. It has a face that resembles a squid, with tentacles hanging from its mouth. The Seeker is an extremely aggressive creature, and will attack anything that it sees. It is not tamble, nor is it ridable.  If you kill a Seeker, it has the chance to drop Raw Meat, Hide, or Oil.

The oil is its most useful aspect, as Oil is a relatively harder resource to come by in the Aberration. If you find yourself fighting one, you can weaken the Seeker by turning off any charge sources that you may have. This will weaken it and make it a much weaker enemy to face. 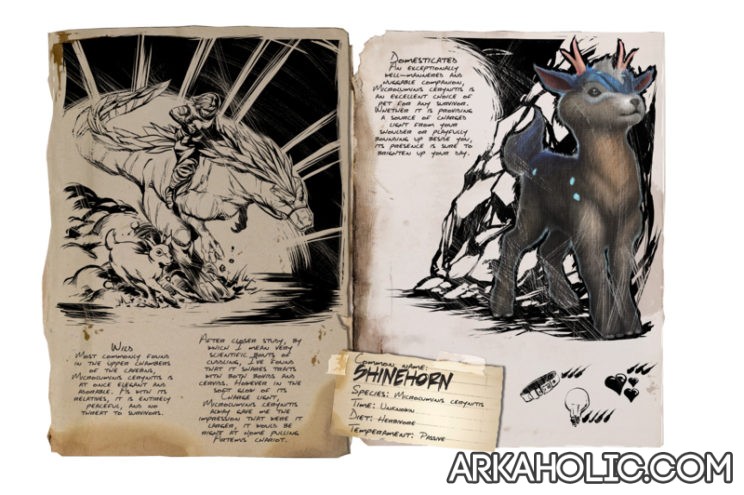