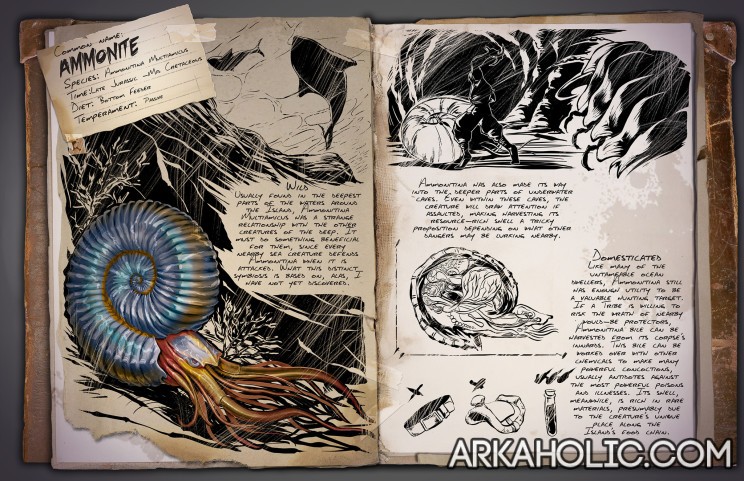 The Ammonite is a passive creature and will often lay towards the bottom of the ocean. You can provoke it by attacking it or coming too close, and when you do so, be careful as it will release a green inky substance into the surrounding waters. This substance will attract all nearby animals to come towards you and instantly turn aggressive. If you run out of the waters after being sprayed by this substance, even land animals will come towards you until after it has worn off. The Ammonite is most commonly found in any of the waters surrounding the island, and not at all found on the Scorched Earth Map.

It has a carrying weight of thirty, which means it can be carried by the Kaprosuchus, Megalosaurus and the Tusoteuthis, though I do not see any purpose in doing so. There is some incentive to hunt these creatures, as they drop a special item that is used to craft Pheromone Darts. These are special darts that are used to attract wild animals towards a specific targeted person or creature. These can be used very effectively to help take down some of the biggest creatures on the island, or when engaged in a tribe versus tribe battle. 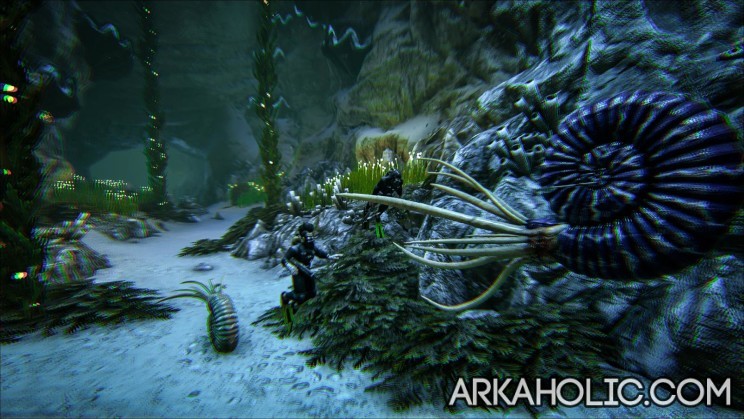 This special item that the Ammonite drops is an Ammonite Bile. The Ammonite also has the chance to drop Black Pearls, Chitin, Oil, Raw Meat, and Silica Pearls. Obviously, the Ammonite has a ton of very valuable drops, so it may be worth for newer tribes to hunt them down for their valuable goods.

The Ammonite has a very low health pool, so killing one should be a non issue. You should easily be able to take one down in one hit with almost any weapon when aiming for its head, and not the shell. I suggest the pike or any low level weapon that you do not mind getting up and close with. The only danger that you face when attacking the Ammonite is that green substance that it will spew into the surrounding water. If this happens, you should either find a tribe made, or run towards the land. The effect will last for about a minute, so if you are in a not so populated area, you should be find to just hunt the Ammonite.

Although you cannot breed or tame or even ride them, the Ammonite are a valuable asset to the island. They help keep the waters clean and will drop a special bile that is made for a certain kind of dart. I do think it is worth investing some time into to hunt down these creatures if you want to have access to not only these special darts, but all of the other resources that the Ammonite has as well. Killing an Ammonite will yield one experience per level, so if you are a new survivor, they are an easy way to level up if you are in a safe and secluded area.

Wild: Usually found in the deepest parts of the water around the island, Amonitina multiamicus has a strange relationship with the other creatures of the deep. It must do something beneficial for them, since every nearby sea creature defends Ammonitina when it is attacked. What this distinct symbiosis is based on, alas, I have not yet discovered.

Domesticated: Like many of the untameable ocean dwellers, Ammonitina still has enough utility to be a valuable hunting target. If a tribe is willing to risk the wrath of nearby would-be protectors, Ammonitina bile can be harvested from its corpse’s innards. This bile can be worked over with other chemicals to make many powerful concoctions, usually antidotes against the most powerful poisons and illnesses. Its shell, meanwhile, is rich in rare materials, presumable due to the creatures unique place among the island’s food chain.

Known Information: Ammonitina has also made its way into the deeper parts of underwater caves. Even within these caves, the creature will draw attention if assaulted, making harvesting its resource-rich shell a tricky proposition depending on what other dangers may be lurking nearby.