The ARK Island is a huge land mass with several different biomes and regions. This island can be intimidating to new players so here is a full guide to the entire map with the areas labeled. Knowing the map and knowing what dinosaurs spawn where and what region requires heat resistance or cold resistance is very important to learning the game and expanding your ARK Empire.

Knowing the map is also important so you can communicate with your tribe as to exactly where you want to be. Saying the North is very broad and there are a lot of regions in the north. 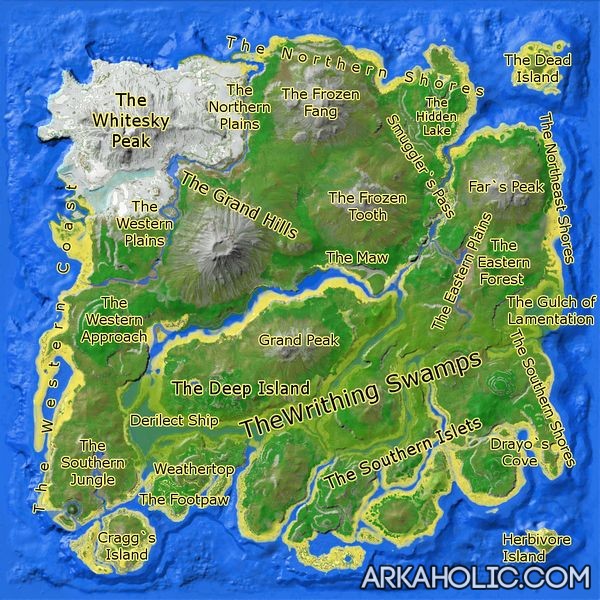 See the map at any time for reference to which region we are talking about.

Northern Plains – The Northern Plains are in the northern most region of the island which features a river that splits it in two. These plains are located between two mountains, the Whitesky Peak and the Frozen Fang. If you travel north of the planes and into the water, an underwater cave can be found. The following dinosaurs can be found in these plains: Dilo, Dragonfly, Megapiranha, Parasaur, Phiomia, Pteranodon, Raptor, Triceratops, Titanomyrma, Mammoth, Paracer, Sabertooth, Procoptodon, Stegosaurus, Giganotosaurus, and a Rex. The Plains offer a wide array of resources to. In these plains you can find: Berries, Fiber, Flint, Metal, Stone, Thatch, and Wood.

Frozen Fang – The Frozen Fang is a mountain in the northern region. This mountain is snowy and considered a snow biome. The creatures that you can find here are: Ankylosaurus, Argentavis, Carnotaurus, Compy, Doedicurus, Sabertooth, Scorpion, Stegosaurus, Raptor, and Procoptodon. Despite being a lot less common, you can also find Giganotosaurus, Rex, and Quetzal. In the Frozen Fang, you can expect to find: Crystal, Flint, Metal, Rare Flower, Rare Mushroom, and Stones.

Frozen Tooth – Frozen Tooth is the other mountain in the northern region. Frozen Tooth is known for having an extremely high amount of crystal at the top. Be cautious as this mountain is extremely dangerous to traverse as you can easily slip and fall, I definitely recommend scaling it with creatures that can climb with ease. You can find the following dinosaurs here: Ankylosaurus, Argentavis, Doedicurus, Raptor, Rex, Sabertooth, and Scorpions. On top of having a lot of crystals, you can also find Metal and Obsidian. 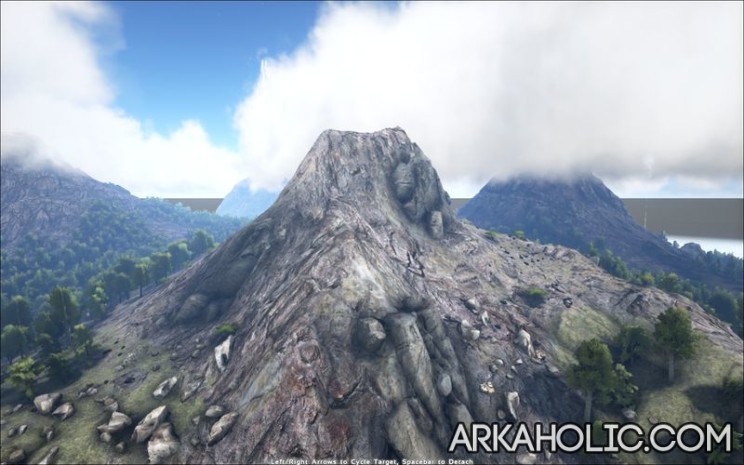 Smuggler’s Pass – Smuggler’s Pass is a ravine of sorts which stretches across a lake and has forests on both sides. Here you can find: Ankylosaurus, Dragonfly, Brontosaurus, Dilophosaur, Dragonfly, Pulmonoscorpius, Titanomyrma, and Stegosaurus. You can also find an abundance of Berries, Wood, thatch, Stone, Flint, Metal, and Fiber.

Hidden Lake – The Hidden Lake is a valley with a small lake which is hidden in the hills and trees of the northern region. This is a great place to set up a base camp if another tribe is not currently occupying it. There is not an abundance of any resources here and rarely are dinosaurs present. There is a Beacon that spawns here which can either be blue, purple, yellow, or red.

The Maw – The Maw is a valley in between the hills and the two mountains. This area is a wetlands that is infested with: Argentavis, Phiomia, Pteranodon, Sarco, Scorpion, and Titanoboas. There is no abundance of resoures here.

Dead Island – The Dead Island is an Island located off the cost which is known for having multiple beacons that spawn here. This is an excellent spot for a base and is often much contested in servers. On this island you can also find a cave which houses the Artifact of the Devourer. There is no abundance of resources or creatures here as it is a island with mostly beaches.

Eastern Plains – The Eastern Plains is similar to that of the Northern Plains in terms of dinosaurs and resources. What’s noteworthy about this place is that you have a better chance of finding a Sarco here than in any of the areas in the North.

Far’s Peak – Far’s Peak is a great place to find a lot of Crystal, Obsidian, and Metal. Climbing the mountain is no easy task as it is very steep and a dangerous place. However, if you do make it to the summit, the rewards are great. You can most commonly find the Pachy in this area.

Southern Islets – The Southern Islets are an archipelago that stretches across the southern coast. The Southern Islets have the most caves compared to any other region in the game. For this reason, I do not recommend new players to travel to these areas unless they are equipped and ready to deal with some of the dangers. Here you can find: Ankylosaurus, Brontosaurus, Dilo, Stegosaurus, Triceratops, Raptor, and Trilobites.

Herbivore Island – Herbivore Island is a small island in the southern area of the waters. You definitely need a water creature of raft to get here as most players who try and swim often fail and drown in the process. It gets its name as its home to most of the Herbivores in the game. Here you can expect to find Brontosaurus, Parasaur, Phiomia, Pteranodon, Megalodon, and Procoptodon. You can find a wide range of resources here such as Berries, Flint, Fiber, Metal, Stone, Thatch, and Wood. For this reason, this is the perfect beginning place for new players assuming they can make the journey to get here. One thing to note is that Megalodons often patrol the waters surrounding the island.

Southern Jungle – The Southern Jungle is a dense forest in the southern region. It borders Craggs Island to the south. Re you can expect to find Ankylosaurus, Gigantopithecus, Triceratops, Pachy, and Titanomyrma. There is an abundance of metal available here and wood.

Cragg’s Island – Cragg’s Island is located in the southern most region and home to the Red Obelisk. There are few dinosaurs and resources here but you can expect to find: Coelacanth, Dodo, Pachy, Trilobite, and Stegosaurus. This is one of the more friendly beginner regions as there are few dinosaurs available here that are deadly. The only thing to fret is getting across the water to this island as it often houses Piranhas and Megalodons.

Western Coast – The Western Coast is one of the largest areas as it spans most of the western coast. This region is often very contested due to the beachy areas and tribes can easily isolate themselves and plan any attacks without drawing any unwanted attention. You can find: Dodo, Coelacanth, Pteranodon, Triceratops, Carbonemys, Dilo, Bronto, Trilobite, and Compys here. The most common resources are: Silica Pearls, Oil, Berries, Flint, Metal, Stone and Thatch.

Western Plains – The Western Plains are unique for their waterfall which is a popular place for new players to flock to. There is also a Beacon which commonly spawns in this area. You can find the same dinosaurs and resources as the area above here.

The Whitesky Peak – The Whitesky Peak is a frozen tundra region where cold resistance is definitely needed. The Whitesky Peak is home to packs of Direwolves so be sure to be on the lookout and keep your guard up when you are here. This is one of the most dangerous regions on the island so it is recommended that new players to stay away until they can fight off the creatures that inhabit it. You can expect to find: Direwolves, Sabertooths, Mammoths, Megaloceros, Kairuku, and the occasional Rex. Here you can also find an abundance of Metal, Crystal, Obsidian, Oil, and Silica Pearls.

Deep Island – Deep Island is located in the center of the island which is home to the Grand Peak. This region is surrounded by a river and a lake. Here you can find in abundance: Paracer, Parasaur, Oviraptor, Carno, and Pteranodon.

Grand Peak – The Grand Peak is a tall mountain located in the center of the island. This region is considered a snow region as temperatures will drop to the negatives during night time. Here you will find Crystal, Metal, Rare Mushroom, Stone and Flint. This area you can also find: Ankylosaurus, Argentavis, Rex, and Sabertooths.

Withering Swamps – The Withering Swamps are one of the few swampy regions in the island. It spans from the center of the island to the eastern coast. Here you can find: Beelzebufo, Meganeura, Megapiranha, Sarco, and Titanoboa.