Skins! Skins are purely cosmetic and can be found all throughout the island. The skins will not increase any particular stat, they are there just to make things look nicer. 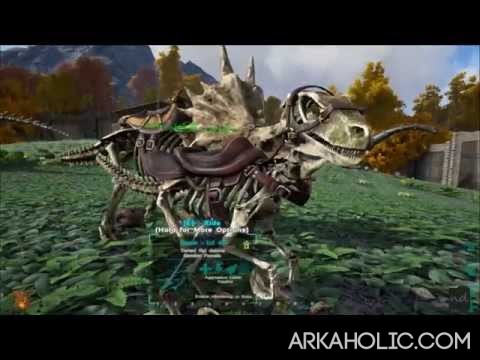 These skins can only be applied to the player. All skins can be used once.

Hunter Hat Skin – A cowboy like hat that can be applied to any headgear. It cannot be dropped from your inventory, it can only be destroyed. This skin is given to everyone and is placed in your inventory on first spawn or after death.

Nerdry Glasses – Nerdry Glasses are a skin that can be applied to any headgear. Once applied, it will be gone. These glasses are a reference to Dennis Nedry from Jurassic Park who was killed by Dilos. It can only be found by killing Dilos, or in random supply crates.

Dodo Rex Mask Skin – The Dodo Rex Mask Skin is a skin that can be applied to any headgear. This was obtained by killing a Dodo Rex. This skin can also be mounted on a trophy wall mount and used as decoration for your base.

Fire Works Flare Gun – This skin can only be applied to a flare gun. Once applied, it will create a firework effect when the flare is shot and has reached its highest point. This skin is obtained by killing Pleiosaurs, Spinosaurs, or Mosasauruses. It can also be found in Beacon Drops. The flare gun skin effects entire stacks of flare guns. So to get the most use out of the skin, I suggest keeping one skinned flare gun to get more skinned guns without having to use another actual skin.

These skins can only be applied to dinosaurs!

Dino Glasses – Dino Glasses are a skin that can be applied to any saddle in your inventory. The creature that wears the saddle with the glasses will appear with glasses. This works on any saddle in the game currently.

Rex Stomped Glasses Saddle Skin – This saddle skin can be applied to a Rex Saddle. Once applied, it will modify your Rexes appearance to make it look more hip. The only way to obtain this skin is to own The Stomping Land on Steam.

Parasaur ARK Founder Saddle Skin – This skin can be applied to a Parasaur Saddle in your inventory. In order to obtain this skin, you must have purchased Ark: Survival Evolved during its Early Access period.

Dino Witch Hat Skin – This is similar to the Witch Hat Skin, except this variation can be applied to dinosaurs instead of people. It was made with the same recipe as the other witch hat during the Halloween event.

Rex Bone Costume – This skin is dropped by Alpha Rexes during the Ark: Fear Evolved. This skin will make a tamed Rex appear as a skeleton. If you obtained it during the event, it will stay on your account even after the event is over.

Carno Bone Costume – This skin was dropped by Alpha Carnos during the ARK: Fear Evolved event. It will make your tamed Carnos look like skeletons.

Raptor Bone Costume – This skin was dropped by Alpha Raptors during the ARK: Fear Evolved event. It will make your tamed Raptors look like skeletons.

Bronto Bone Costume – This skin was dropped by skeletal Brontos during the Ark: Fear Evolved event. It will make your tamed Brontos appear to be skeletons.

Stego Bone Costume – This skin was dropped by skeletal Stegos during the Ark: Fear Evolved event. It will make your tamed Stego appear to be a skeleton.

Trike Bone Costume – This skin was dropped by skeletal Trikes during the Ark: Fear Evolved event. It will make your tamed Trikes appear to be skeletons.