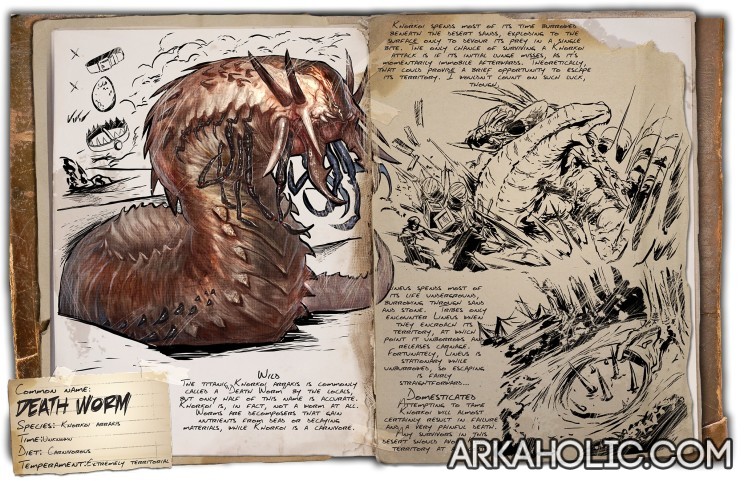 The Death Worm is an extremely territorial creature, meaning it will attack any player or creature that comes too close to it. The Death Worm moves under the sand, and you will notice the sand moving in a weird pattern when it is moving underground. When you come too close, the Death Worm will chase you until you are far enough away that it no longer deems you a threat. When you do make it aggressive, it will come out from underground and come to the surface to fight you. It will lunge at you and do whatever it takes to take you down. If you try and run from it, it will dive back down into the sand and try to follow you.

The Death Worm also has the Alpha Death Worm variant, which is just a larger, more powerful version of the regular Death Worm. Killing one of these monsters will yield a ton of experience as well as the chance to drop: hide, keratin, Death Worm horn, leech blood, black pearl, Angler gel, raw meat, and raw prime meat. The Death Worm cannot be picked up and carried by any other mount. It is most commonly found in the Dunes region of the map and is an extremely rare sight.

If you are a server admin, you can spawn a Death Worm by entering the following chain into the admin console: admincheat summon Deathworm_Character_BP_C 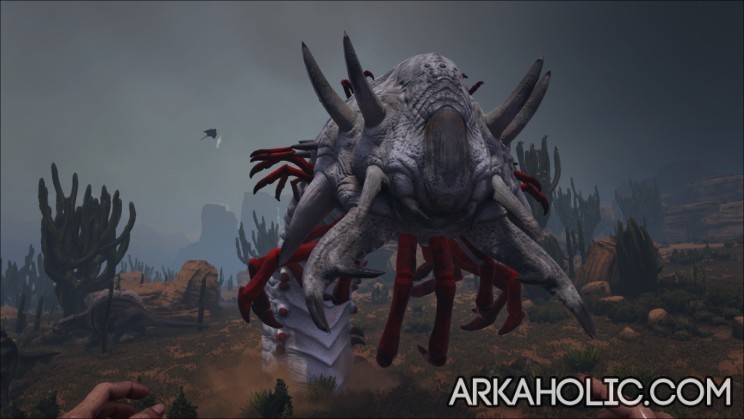 How to Fight the Death Worm

Since you cannot tame one, you are given the incentive to fight it by its unique drops. It can drop Death Worm Horn, which is used to create the Broth of Enlightenment. It is also used to tame certain creatures on the island. It is worth mentioning that the Alpha version of this creature will always drop 20 units of Death Worm Horn.

The best way to go about fighting it is to team up and take it down together. You will want one person to take the agro from the monster while the others are shooting at it. You can also use any big mount such as a T-Rex. You can also use a flying mount with a platform saddle to make sure you are out of the way of any of its attacks. Death Worms are extremely dangerous and extremely hard to take down. If you are a lone person out in the desert, I will almost always recommend that you run instead of trying to fight one of these guys unless you have some serious fire power or a large mount with you to protect you.

The Death Worm has been seen making traps around the desert as well, so always be sure you are watching where you are walking when going through the dunes region of the map. I recommend using the “K” camera mode on PC to look around as it allows you to spot the traps a lot easier than normal. A Death Worm can also destroy houses made out of adobe so if you are just starting out on this map for the first time, do not make a house in the dunes region otherwise you are in for some serious trouble. Its attacks can easily do up to 200 damage at even its weakest levels, so be sure you are well equipped if you are entering the regions on the map that house the Death Worm.

I do think it is a fun time when you are geared up enough to hunt for the Death Worm with a group from your tribe. If you are hunting the Alphas, you can gain a ton of resources that will most definitely help you as you are progressing through the game.

Wild: The titanic Khorkoi arrakis is commonly called a “Death Worm” by the locals, but only half of this name is accurate. Khorkoi is, in fact, not a worm at all. Worms are decomposers that gain nutrients from dead or decaying materials, while Khorkoi is a carnivore.

Domesticated:  Attempting to tame Khorkoi will almost certainly result in failure and a very painful death. Any survivors in this desert should avoid Khorkoi territory at all costs.

Known Information: Khorkoi spends most of its time burrowed beneath the desert sands, exploding to the surface only to devour its prey in a single bite. The only chance of surviving a Khorkoi attack is if its initial lunge misses, as it’s momentarily immobile afterwards. Theoretically, that could provide a brief opportunity to escape its territory. I wouldn’t count on such luck though. Lineus spends most of its life underground, burrowing through sand and stone. Tribes only encounter Lineus when they encroach upon its territory, at which point it unborrows and releases carnage. Fortunately, Lineus is stationary while unburrowed, so escaping is fairly straightforward…