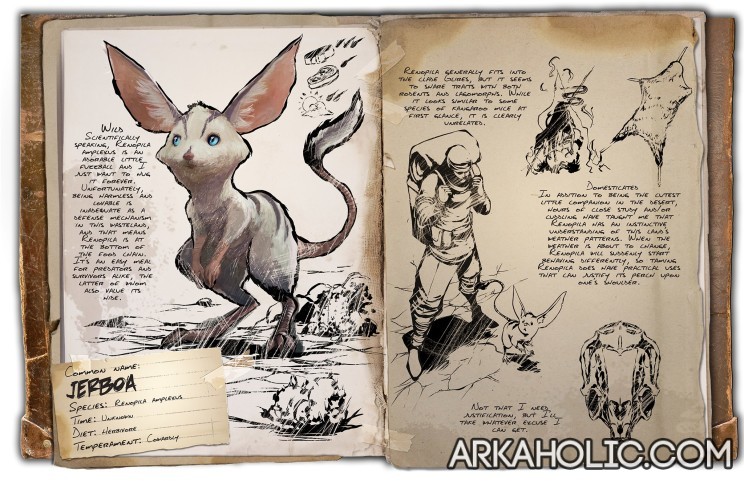 The Jerboa is a harmless creature that will aimlessly run around the desert running from anything that it encounters. Once it sees either you or another dinosaur, it will instantly try to run away and hide. The Jerboa resembles the modern fennec fox as it has large ears and a long tail. The Jerboa is most commonly found in the canyon area on the scorched earth map only. You cannot find the Jerboa on the island.

Jerboa produce small sized feces and killing one will yield hide and raw meat. They have a carrying weight of 25, which means they can be picked up by the following creatures: Kaprosuchus, Megalosaurus, Tapejara, Pteranodon, Argentavis, Quetzal, Tusoteuthis, and Wyvern. If you find yourself having trouble chasing the Jerboa, you can immobilize it by using a bola trap, bear trap, or a plant species y trap.

The Jerboa also has a random chance of being a Skeleton Jerboa which unique in the sense because it can drop a Jerboa Bone Costume when it is killed. You can then apply that costume to your normally tamed Jerboa to have a unique costume that makes it unique!

Note that if you are trying to make one of your own, you will need to put two Jerboas together in the hopes that they mate. It will take a total breeding time of about a day and a half until the newborn Jerboa is fully grown and accessible to use as your own.

IF you are a server admin, you can spawn a Jerboa instantly by entering the following into the console: admincheat summon Jerboa_Character_BP_C 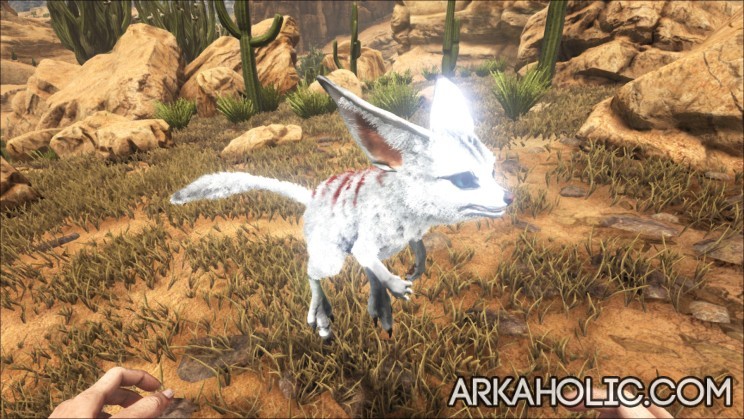 How to Tame a Jerboa

When trying to tame one of these guys, the basic strategy is to basically hit it and follow it around when it tries to run away. It is a relatively slow creature, so almost anyone should have the proper movement speed to catch up to it. This is one of the easiest creatures to tame and is a recommend one for newer players and tribes. For a level thirty Jerboa, you will only  need to hit it four times with a slingshot, or one time with a tranquilizer arrow. I almost recommend using your fists so that you do not accidentally kill it as it can be super frustrating to do so.

Once you have it knocked out, know that its preferred food is that of a Plant Species Y Seed. If you do not have this available, you can substitute it for vegetables, mejoberries, or regular berries. It will take less than ten minutes to complete the taming process and you’ll have your very own Jerboa!

Once you have it tamed, you can pick it up and let it ride on your shoulder by pressing E on it. When it is on your shoulder, you will only take on half of the weight that the Jerboa has, so keep that in mind when picking yours up. You can also equip them with helmets to help make them a bit healthier, though their health is naturally really low. The most unique thing that the Jerboa can do for your tribe is that it can act as a weather detector. The Jerboa can actually warn you against incoming weather conditions such as lightning storms, sand storms, heat waves, or rain. There are certain signals that it will emit to let you know which signal it is sending you.

If the Jerboa is making a very low growl type noise with its ears lowered and its tail wagging, that is its signal to you that a lightning storm approaches. It will emit a high pitched noise and bark upwards towards the sky if a sand storm is approaching. If you notice a medium groan while it is digging towards the ground, that’s its indication that a heat wave is coming. Lastly, if it starts sniffing and looks up at the sky, you will know that means a rain storm is coming.

One cool thing you can do with a Jerboa is bring it with you when you are taming some of the bigger animals on this map and have it carry twice as much food. Since it halves all of its inventory when you carry it, you can essentially use it as an extremely efficient backpack.

Wild: Scientifically speaking, Renopila Amplexus is an adorable little fuzzball and I just want to hug it forever. Unfortunately, being harmless and lovable is inadequate as a defense mechanism in this wasteland, and that means Renopila is at the bottom of the food chain. It’s an easy meal for predators and survivors alike, the latter of whom also value its hide.

Domesticated: In addition to being the cutest little companion in the desert, hours of close study and/or cuddling have taught me that Renopila has an instinctive understanding of this land’s weather patterns. When the weather is about to change, Renopila will suddenly start behaving differently, so taming Renopila does have practical uses that can justify its perch upon ones shoulder. Not that I need justification, but I’ll take whatever excuse I can get.

Known Information: Renopila generally fits into the clade Glires, but it seems to share traits with both rodents and lagomorphs. While it looks similar to some of the kangaroo mice at first glance, it is clearly unrelated.