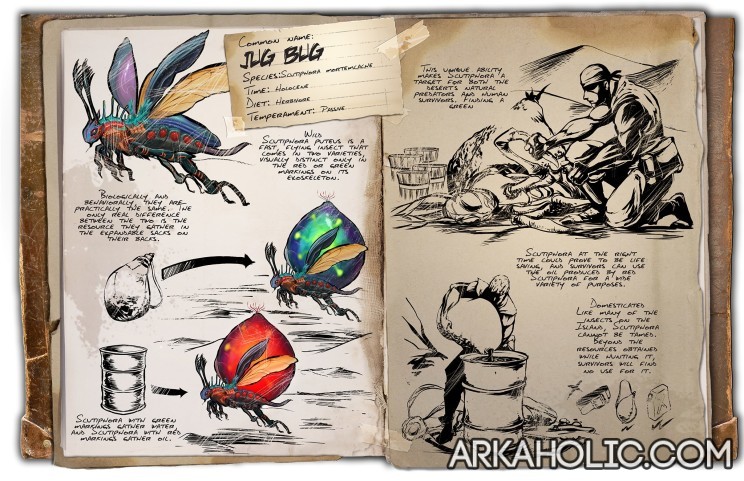 These grasshopper like creatures will roam throughout the scorched earth looking for resources and gathering them. The Jug Bug comes in two different variants, the Water Jug Bug, and the Oil Jug Bug. The difference between these different versions is what loot the Jug Bug can carry. The Oil Jug Bugs are far more likely to carry cementing paste, while the Water Jug Bugs are more likely to carry Chitin. Any Jug Bug has the chance to drop raw meat, as well as cementing paste and chitin, only the quantity will change depending upon which version you are hunting.

The Jug Bug does not produce any feces and has a carrying weight of thirty, which means it can be carried by the Kaprosuchus, Megalosaurus, and the Tosoteuthis. The Jug Bug can be immobilized by the bola trap, bear trap, and plant species y trap. The Jug Bug has the ability to damage thatch structures, so if you are living where the Jug Bug is abundant, you might want to consider making a house that is made of something stronger. The Jug Bug is most commonly found in the canyon area as well as the low desert.

Although you cannot breed the Jug Bug, they are very common throughout the scorched earth map. Often times, if you find one wandering around, there will most likely be more in that area, so search around! I have always personally found that they are common throughout anywhere on the scorched earth map and they are one of my favorite insects in the game for all of the utility that they provide.

If you are the admin of a server, you can spawn any one of the variations in an instant by entering the following into the console: admincheat summon JugBug_Character_BaseBP_C 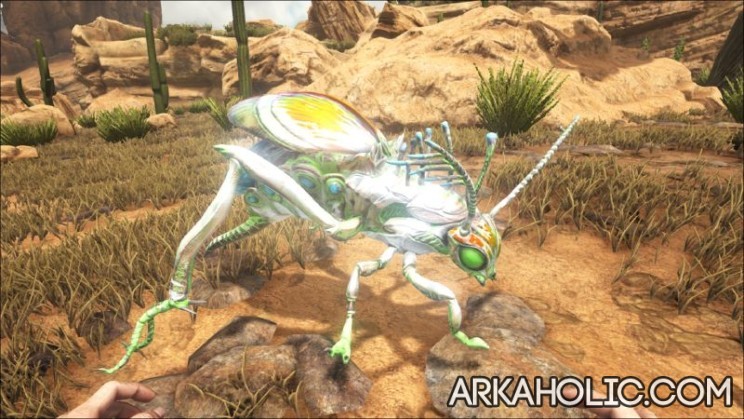 How to Utilize the Jug Bug

The Jug Bug is the perfect creature for a new coming survivor to start off killing. They pose absolutely no threat because they will not attack you no matter what you do to it. The only real danger that can occur by attacking one is that when the Jug Bug is running away, it may lead you to a more dangerous creature that will not hesitate to end your life. You may also find yourself staring at the ground while chasing it, so you can (and this has happened) run straight off of a cliff and fall to your death by not looking at where you were going.

Even though the Jug Bug is not tamable, there is still a lot of utility that it can provide for you and your tribe. The Jug Bug is a great source of both water and oil on this scorched earth map. If you can, you can easily trap one of these guys in a cage and harvest them for their resources. This will give you basically an infinite supply of water and oil. You can even drink water straight off of a Jug Bug without having to kill it. If you have two or three of these guys caged near your home, you can have a huge advantage over your enemy tribes by having a huge massive stash of resources and almost never having to venture out for these resources. This will save you a ton of time in the long run because you will not have to dedicate your tribe’s time to finding these resources.

If you want to take this one step further, you can tame a Beezlebufo and harvest cementing paste from the Jug Bug without killing it. This is again just showing you how many resources you can take from this creature. I definitely think having a few of these guys caged near your house will provide you with a ton of resources in the long run and will definitely serve your tribe well.

Wild: Scutinphora puteus is a fast, flying insect that comes in two varieties, visually distinct only in the red or green markings on its exoskeleton. Biologically and behaviorally, they are practically the same. The only real difference between the two is the resource they gather in the expandable sacks on their backs. Scutinphora with green markings gather water, and Scutinphora with red markings gather oil. This unique ability makes Scutinphora a target for both the desert’s natural predators and human survivors. Finding a green Scutinphora at the right time could prove to be life-saving, and survivors can use the oil produced by red Scutinphora for a wide variety of purposes.

Domesticated: Like many of the insects on the island, Scutinphora cannot be tamed. Beyond the resources obtained while hunting it, survivors will find no use for it.