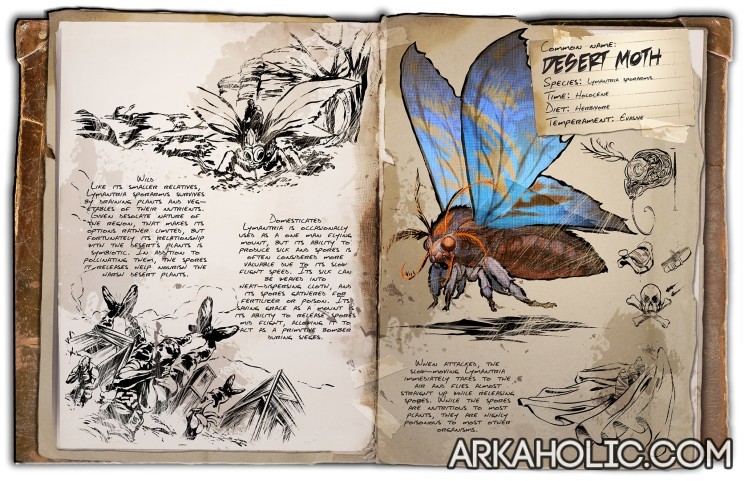 The Lymantria is a very passive creature, meaning it will not go out of its way to attack unless it is provoked first. When you hit it, it will release a green cloud of spores that will slow you and any nearby dinosaurs by ninety percent and drain your stamina. During this time, the Lymantria will typically make its escape and try to run from the threat. It is typically found in the high desert area on the scorched earth map, and cannot be found on the island.

The Lymantria produces silk, so killing one will almost always yield silk. It may also drop chitin and raw meat. It is tamed through conventional knocking out methods and its preferred food is kibble from a Thorny Dragon Egg or Vegetables. It requires a level 45 Lymantria Saddle to ride it once tamed. It has a drag weight of about 150, which means only the Megalosaurus has the ability to pick it up.

If you are having issues when trying to tame it, you can immobilize it by using a bola trap, chain bola, bear trap, large bear trap, or a plan species y trap. All of these will stun or significantly slow the Lymantria making it easier to tame. The Lymantria will produce Moth Eggs which are used Kibble.

If you are the admin of a server, you can spawn one of these creatures by entering the following into the console: admincheat summon Moth_Character_BP_C 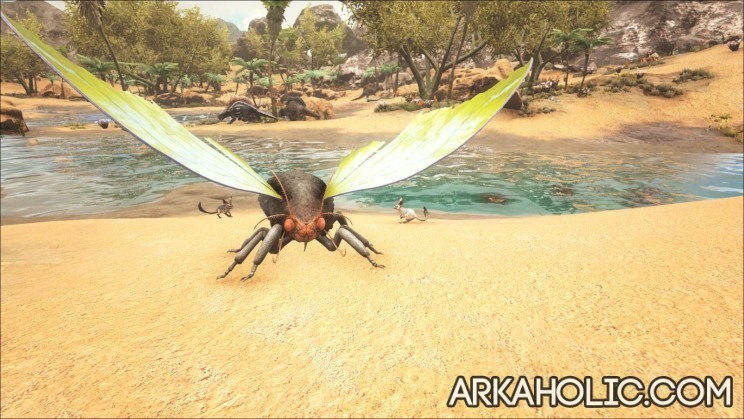 How to Tame & Ride a Lymantria

The best strategy to go about knocking one of these guys out is to use a bola so that it cannot fly away once it releases its spores on you. Once it is stunned, it will be very easy to knock it out. I recommend aiming for the wings or its abdomen for the quickest knock out as shooting it in the head will usually result in it dying.

If you are encountering a level thirty Lymantria, it will only take 17 tranquilizer arrows, 10 tranquilizer crossbow hits, or 7 tranquilizer darts to knock it out. Once it is knocked out, if you feed it kibble from a Thorny Dragon, it will only take 6 units for a total taming time of about 20 minutes. If you do not have this accessible to you, you will need to use Vegetables as a replacement. Using vegetables is a lot less efficient because it will take a total taming time of almost two hours and waste a lot of narcotics.

Once you have it tamed, the Lymantria can provide a few useful things for new players. First of all, it is a decently accessible flying mount. Although it isn’t very fast and its attacks are relatively weak, the Lymantria is an easy to acquire flying mount for newer players. This can be used to transport goods or to just explore the area in which you live. You can also use this as a taming mount because its attacks will not agro certain creatures which will allow you to slow creatures and have another tribe member hit them to knock it out easier. Lastly, the Lymantria is extremely useful because it has the ability to produce silk. This alone is something worth exploring for any sort of tribe no matter how far progressed they are. Silk is used to create tents, whips, and desert clothing so it can be useful for almost every player at any given stage in the game. This is significant again because the scorched earth map has no alternative way to get silk other than the Lymantria.

If you are new to the scorched earth and want to get yourself established on your server, the Lymantria is the perfect creature to help you get started. You can either kill them for a decent amount of experience, or you can kill them for their silk and get on to producing armor. The Lymantria’s eggs are used to make kibble, but despite there not being a dinosaur that prefers this kibble, it is only speculated that eventually one will be added so it would be advised to stock up while you can.

Wild: Like its smaller relatives, Lymantria sporarmis survives by draining plants and vegetables of their nutrients. Given the desolate nature of the region, that makes its options rather limited, but fortunately its relationship with the desert’s plants is symbiotic. In addition to pollinating them, the spores it releases help nourish the harsh desert plants.

Domesticated: Lymantria is occasionally used as a one man flying mount, but its ability to produce silk and spores is often considered more valuable due to its slow flight speed. Its silk can be weaved into heat-dispersing cloth, and its spores gathered for fertilizer or poison. Its saving grace as a mount is its ability to release spores mid flight, allowing it to act as a primitive bomber during sieges.

Known Information: When attacked, the slow-moving Lymantria immediately takes to the air and flies almost straight up while releasing spores. While the spores are nutritious to most plants, they are highly poisonous to most other organisms.