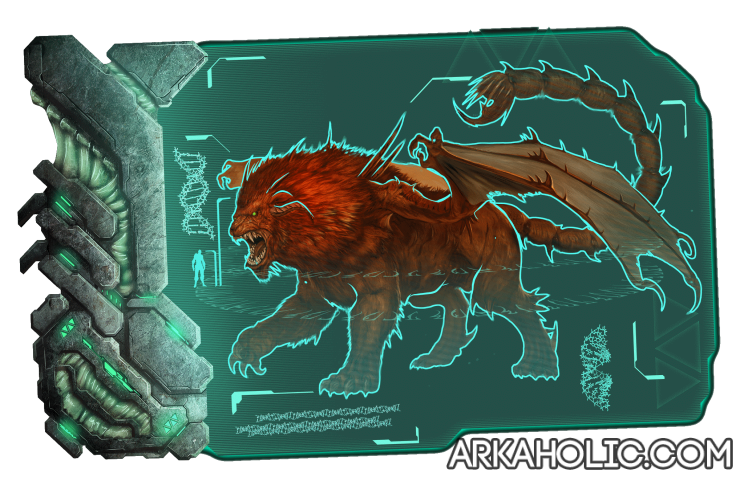 The Manticore is the boss of the Scorched Earth map and will always spawn looking the same way. It does not have different color patterns like the creatures on the island and the Scorched Earth. Killing the Manticore will yield 3,000 experience per level that it is and a Manticore Trophy, Manticore Flag, Manticore Shield Skin, and an Element. The element is the rare item here that people are after when they are going to fight the boss. The Element can be used to craft Tek level armor, which is some of the best in the entire game.

In case you are not familiar, the three artifacts are located at different points on the map. The Gatekeeper is located inside of the cave in the Old Tunnel region on the map. Refer to the Scorched Earth Map Review article for more details on specific locations. The Artifact of the Crag can be found in the cave in the Mountains region of the map. Lastly, the Artifact of the Destroyer is found in a cave in the southeast region of the map. 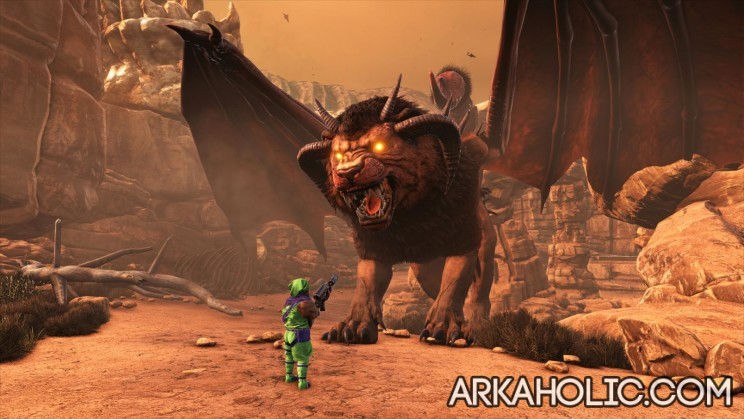 Once you have all of the items, you’ll be able to open the portal to go to the Manticore arena. As soon as you get in there, you’ll notice that the floor is full of Death Worms. The Manticore will usually just fly around and shoot purple bolts down toward you. These bolts will inflict torpor, so be sure to be extra careful when fighting it. When the Manticore gets to about 25 percent health, Rock Elementals will begin to spawn which will make the fight a lot harder. I suggest just trying to run away from them and avoid them all together.

What most people think they should bring in terms of weaponry are rockets. Let me assure you this is not a great idea. They fire very slowly and the Manticore will fly around quickly. The best weaponry to bring is a Dino that has high health and a platform saddle that has a cannon on it. I recommend the Paracer for this.

For a general strategy, I recommend not leaving the initial platform so that way you can avoid the Death Worms all together. You should be focusing on killing the Death Worms first. Always stay in a ranged distance and bring plenty of long ranged weapons such as assault rifles and cannons. The Manticore can damage all structures, so you cannot build anything while you are in there.

Do not be frustrated if you are having a hard time killing it your first time. You will need a lot of assault rifle ammo and a good leveled dinosaur in order to take it down easily. It doesn’t take a ton of time to get all of the items needed to enter, so you can easily gather them up and try again some other time.

In case you were interested, the Manticore is a creature that comes from Persian mythology. It is traditionally seen as having the body of a lion, the wings of a bat, the tail of a scorpion, and the face of a human. Though, the Manticore in this game does not deem the last feature. In English, the Manticore translates to Man Eater. This is also the first boss that has been introduced into the game outside of the standard Island map. There are plans to add more desert themed bosses to the game, but one can only speculate what and when this will occur.