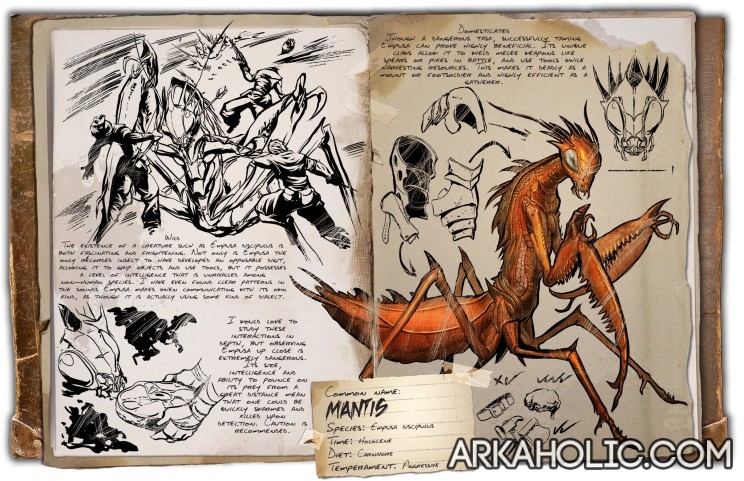 The Mantis is an extremely aggressive creature and will attack almost anything that is a similar size on sight. It is most commonly found in the dunes region on the scorched earth map and comes in varying sizes and colors. The bigger the Mantis, the more dangerous it is. Be very careful when wandering through the desert because encountering two or even three of these guys will most definitely not end well for most survivors who are out on their own.

The Mantis carries Chitin, Organic Polymer, and raw meat and will drop them randomly when you kill them. They have a carrying weight of about 200, which means that the following creatures can carry it: Quetzal, Tusoteuthis, and Wyvern. The Mantis is tamed passively and its preferred food is a Deathworm Horn. The Mantis can be immobilized by a chain bola trap, bear trap, or a plant species y trap. It can also damage both thatch and wood structures, so be careful when putting your base anywhere near where the Mantis lives. The Mantis will also produce Mantis eggs, which can be used to create kibble. This kibble can then be used to tame Rock Elementals.

If you are the admin of a server, you can enter the following into the console to spawn a Mantis instantly: admincheat summon Mantis_Character_BP_C 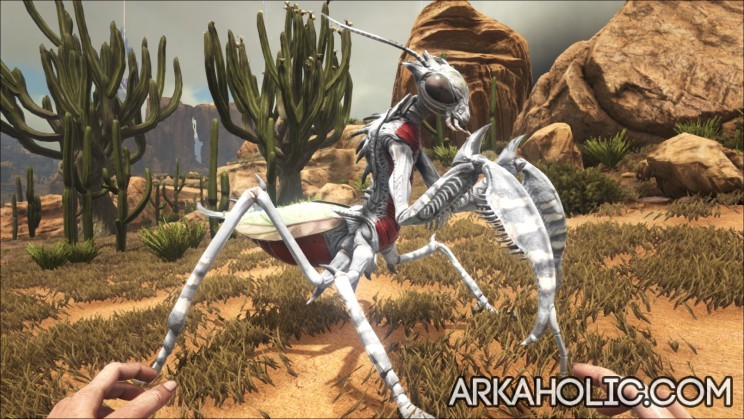 How to Tame and Ride a Mantis

If you want a good strategy to go about taming the Mantis, you can approach it using Bug Repellant so that it does not get aggressive when you come towards it. You can also use Ghillie Armor, but that is if you want to be extra careful. If something wanders too close or you get too close while it is eating, the process will have to restart. Simply put the food that you are trying to feed it in the last slot of your hot keys and approach it and use “E” on it to feed it. You can trap it by creating a small box around it so that it cannot escape from you. Alternatively, you can use the traps suggested above in order to stop it from being able to escape.

The Mantis is tamed passively and the procedure is exactly like every other normally passively tamed creature. The feeding interval for a Mantis is three minutes on official servers, so keep that in mind. If you have a Deathworm Horn, you will only need five units of it for a total time of about fifteen minutes. If you do not have a Deathworm Horn, you will need either spoiled meat, or raw meat.

Once you have one tamed, you will see that the Mantis is actually one of the most useful creatures to have on your team. The Mantis’ main ability is that it can equip tools. It has the ability to equip the following tools: Torch, Stone Pick, Stone Hatchet, Wooden Club, Whip, Scissors, Pike, Metal Pick, Metal Hatchet, Metal Sickle, or a Sword. You can also  use a Mantis Saddle which requires level 50 on it if you wish to ride it.

Since it can equip all of these tools, the Mantis is an amazing gatherer. If you set the Mantis to wander, it can go off and collect any of the following resources depending upon what you equip it with: Flint, Thatch, Hide, Crystal, Raw Salt, Sulfur, Stone, Sand, Wood, Raw Meat, Chitin, Cactus Sap, Metal, Fiber, Obsidian, Raw Prime Meat, Keratin, Silk, or Organic Polymer. It is extremely efficient at gathering almost any resource, so you can put a few of these to good use to collect a ton of resources for you while you are away doing something else.

The Mantis is also good because it can be handy when you are trying to tame other creatures. You can equip it with a club so that it can hit and knock out almost any medium sized creature. If you level up its melee damage, it can easily take down a mid sized scorpion, or even another Mantis. You can also equip it with a sword, so that it can be your own personal assistant out in the world when farming for resources. It is a great battle mount because it has high damage and can equip weapons to help make some fights easier.

Wild: The existence of a creature such as Empusa discipulus is both fascinating and frightening. Not only is Empusa the only recorded insect to have developed an opposable digit, allowing it to grip objects and use tools, but it possesses a level of intelligence that is unrivaled among non-human species. I have even found clear patterns in the sounds Empusa makes when communicating with its own kind, as though it is actually some kind of dialect.

Domesticated: Though a dangerous task, successfully taming Empusa can prove highly beneficial. Its unique claws allow it to wield melee weapons like spears or pikes in battle, and use tools while harvesting resources. This makes it deadly as a mount or footsoldier and highly efficient as a gatherer.

Known Information: I would love to study these interactions in depth, but observing Empusa up close is extremely dangerous. Its size, intelligence and ability to pounce on its prey from a great distance mean that one could be quickly swarmed and killed upon detection. Caution is recommended.