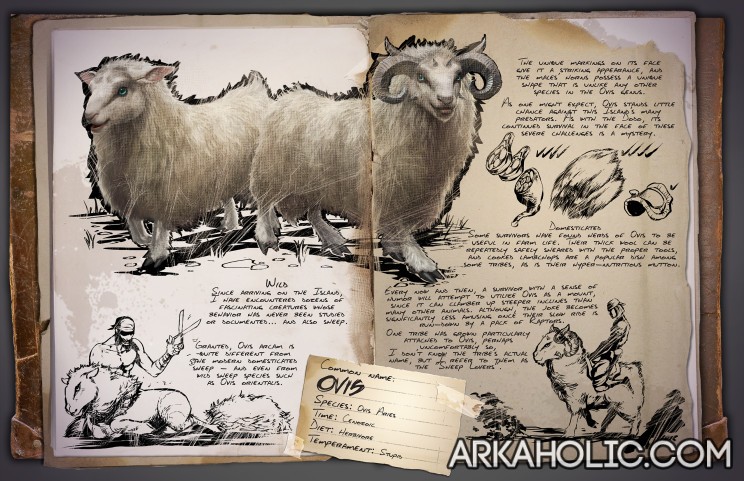 The Ovis isn’t the smartest creature on the island, so when it is in a situation that might be dangerous, it does not quite know how to react. Sometimes the Ovis will run away from you, sometimes it will stay and try and fight, despite being not all that strong. These guys are some of the most random creatures on the island because you can never be quite sure what they are going to do. One thing is for sure, without the Ovis, there would be a serious lack of Mutton on the island for the survivors to eat.

Killing an Ovis will yield hide, pelt, and raw mutton. Ovis have a carrying weight of 85, which means they can be picked up by: Argentavis, aprosuchus, Megalosaurus, Quetzal, Wyvern, and Tusoteuthis. They can be immobilized (if you so dare) by bola traps, bear traps, and Plant Species Y traps.

The Ovis can be spawned by any admin by using the following command in the admin console: admincheat summon Sheep_Character_BP_C 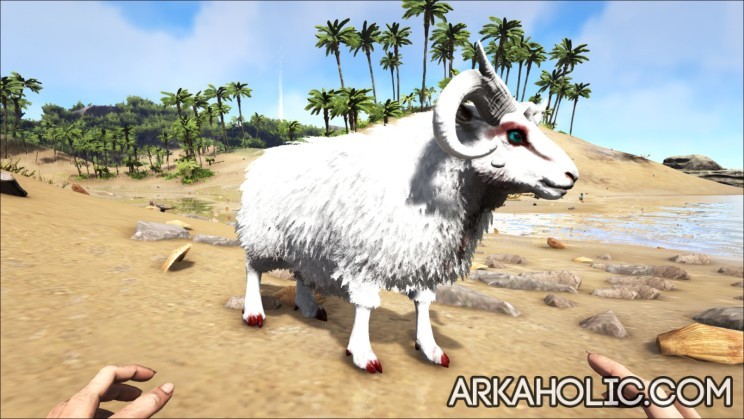 How to Tame the Ovis

If you want to tame one of these creatures, you will not need any sort of strategy. They are tamed completely peacefully and all you need to have is one unit of a sweet vegetable cake. It will take less than ten seconds to complete and you’ll have your very own Ovis! Regardless of what level the Ovis is, you will always need just one unit of the cake and it will always take about ten seconds to complete.

Once you have one on your team, you’ll see that they are quite handy to have. The Ovis will naturally produce wool, so you can sheer them by using scissors on them. You can level up food to increase the rate at which it produces wool if that is a resource that you find your team is lacking. As we know, wool is very useful and great to have an abundance of as it can be used to substitute pelt in any sort of recipe. Pelt is the ingredient in many useful recipes such as bug repellent and fur armor and even some saddles, so it is very useful to have a lot of this resource.

Another great thing that the Ovis provides to your team is that it can climb mountains with an ease. As with real life ram, the Ovis has the unique ability to climb mountains with a breeze. This can make scouting out new areas super easy, or you can check up on some of your neighboring tribes by doing this. I recommend leveling up health and speed if you choose to go this route with your Ovis.

Regardless, having an Ovis on your team can be quite entertaining because they are just the best creatures to set loose and watch their movements. They are so random that people have made games about racing them to see which can complete a small obstacle course before the other. Ovis will always be your pals and having them for wool is a great thing regardless of how big your tribe is! So use those extra vegetable cakes and get your team an Ovis today for all of your wool and entertainment needs!

Wild: Since arriving on the Island, I have encountered dozens of fascinating creatures whose behavior has never been studied or documented… and also sheep. Granted, Ovis arcam is quite different from the modern domesticated sheep – and even from wild sheep species such as Ovis orientalis.

Domesticated: Some survivors have found herds of Ovis to be useful in farm life. Their thick wool can be repeatedly safely sheared with the proper tools, and cooked lambchops are a popular dish among some tribes, as is their hyper-nutritious mutton. Every now and then, a survivor with a sense of humor will attempt to utilize Ovis as a mount, since it can clamber up steeper inclines than many other animals.

Although, the joke becomes significantly less amusing once their slow ride is run-down by a pack of Raptors. One tribe has grown particularly attached to Ovis, perhaps uncomfortably so, I don’t know the tribe’s actual name, but I refer to them as “The Sheep Lovers”.

Known Information: The unique markings on its face give it a striking appearance, and the males’ horns possess a unique shape that is unlike any other species in the Ovis genus. As one might expect, Ovis stands little chance against this Island’s many predators. As with the Dodo, its continued survival in the face of these severe challenges is a mystery