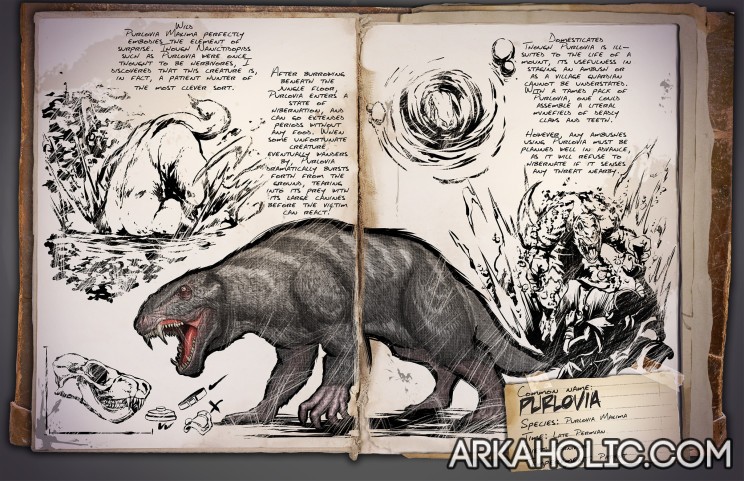 The Purlovia is a patient animal, meaning it will not attack you until it senses you as a threat. To be considered a threat, you must either bump into it or steal its eggs. If you are just going about your way, the Purlovia will not bother you so there is no need to worry about their presence. Killing a Purlovia will yield hide and raw meat.

You can most commonly find these mole creatures in the central area on the island. It produces medium sized feces and has a carrying weight of 300 which means that only the Quetzal, Wyvern, and the Tusteuthis can carry it. This can come in handy later when you are trying to tame it. It is also helpful to know that you can disable a Purlovia by using a chain bola trap, large bear trap, or a Plant Species Y Trap.

If you are the admin of a server, you can spawn a Purlovia on command by typing the following string into the console: admincheat summon Purlovia_Character_BP_C 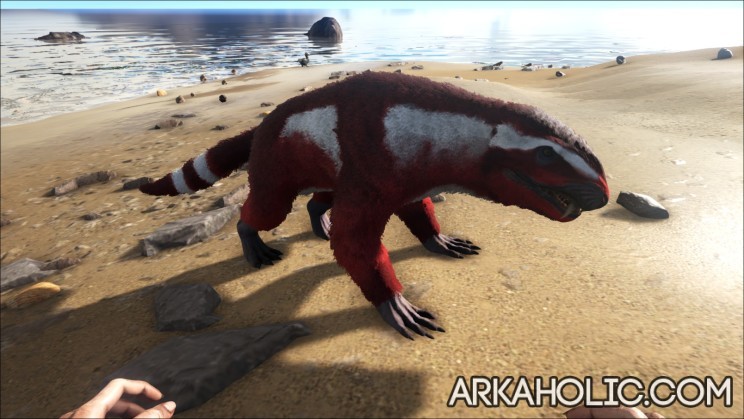 How to Tame a Purlovia

The strategy to tame a Purlovia is basically like every other creature that is tamed through knocking out. I recommend hitting it and running away as to dodge its attacks. The Purlovia is quite fast and can attack a lot, so it can be dangerous if you are dealing with a relatively high leveled one. If you can, the easiest way to tame one is to just pick it up with a different creature and drop it into a one by one box so you can hit it without having to worry about it attacking you or it running away. Like previously stated, you can use a chain bola trap or a large bear trap to easily disable it.

A level thirty Purlovia can be quite the bugger to take down. It requires 56 hits with a slingshot, 16 tranquilizer arrows, or 7 hits with a tranquilizer dart. Its preferred food is kibble that comes from a Moschops egg. If you do not have tht handy, raw mutton will do the trick, or cooked lamb meat. You can also use raw prime meat, but it will take significantly longer. Expect a taming time of about fifteen to twenty minutes.

Once tamed, the Purlovia offers some useful benefits to any tribe. The first thing that it can do for you is collect raw meat and raw prime meat at a decently efficient rate. Just set it to wander and it’ll come back and have a whole bunch of supplies for you. The meat will not spoil as quickly when it is in the inventory of the Purlovia, so you do not have to worry about being on a clock for the food to spoil. If you are using it for farming these resources, I recommend leveling up health and attack as that will allow it to gather more resources.

Another benefit to having a Purlovia on your team is that it has a quick attack that can help tame other creatures. The Purlovia has a very fast attack that can be utilized when trying to take down smaller creatures. This is super beneficial to tribes who are just starting out and want to get more dinos. Interestingly, the real Purlovia was not a carnivore, but a herbivore and was found in what is now Russia.

There is not a lot to be known about what the Purlovia once was as it is not a very common creature. We have the modern weasel which is what it best represents, but other than that it doesn’t have any close relatives. The Purlovia has been hinted at to getting a bunch of new features by some of the developers, so who knows what they have in store for the creature in the future. I would like to see them incorporate some sort of burrowing mechanism into the game, and I think if they do that it will start with this creature. There aren’t any definitive facts out there, only speculation about what kind of features the devs can add into the game for this creature.

Wild: Purlovia Maxima perfectly embodies the element of surprise. Though Nanictidopids such as Purlovia were once thought to be herbivores, I discovered that this creature is, in fact, a patient hunter of the most clever sort.

Domesticated: Though Purlovia is ill-suited to the life of a mount, its usefulness in staging an ambush or as a village guardian cannot be understated. With a tamed pack of Purlovia, one could assemble a literal minefield of deadly claws and teeth. However, any ambushes using Purlovia must be planned well in advance, as it will refuse to hibernate if it senses any threat nearby.

Known Information: After burrowing beneath the jungle floor, Purlovia enters a state of hibernation, and can go extended periods without any food. When some unfortunate creature eventually wanders by, Purlovia dramatically bursts forth from the ground, tearing into its prey with its large canines before the victim can react.