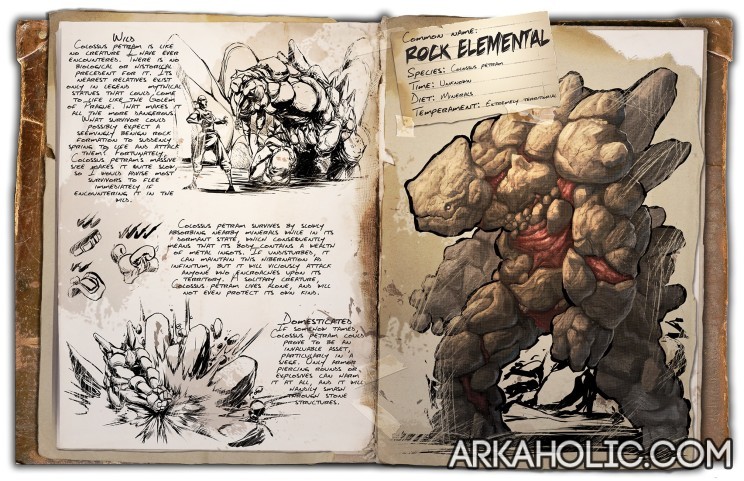 The Rock Elemental is a unique creature. It will lay dormant in a pile of rocks that can be identified by their orange red colors. When something approaches too close to it, the rocks will form together and start chasing the thing near it. It will continue chasing whatever it is that got too close until the Rock Elemental deems it is a safe enough distance away, at which point it will go back into its dormant state. Interestingly, any wild creature that gets hit by a Rock Elemental will not attack it, instead, they will continue to go about their way and ignore it.

The Rock Elemental prefers kibble that comes from a Mantis Egg, or sulfur. You can ride one, though you will need a level 65 Rock Golem Saddle. Killing a Rock Elemental has the chance to yield: crystal, metal, obsidian, oil, stone, or sulfur. They cannot be picked up by any creature in the desert and can damage thatch, wood, adobe, or even stone structures. They are most commonly found in the mountains region of the Scorched Earth map so I definitely suggest avoiding this area if you are a newer player. The Rock Elemental may also appear in the Rubble Golem version, which cannot be tamed and is essentially a smaller version of the Rock Elemental.

If you are the admin of a server, you can spawn a Rock Elemental by typing the following into the console: admincheat summon RockGolem_Character_BP_C

How to Tame and Ride the Rock Elemental

You must knock out the Rock Elemental if you wish to tame it. It will not take topor damage from regular means, you will need to hit it with either cannon balls or some type of explosive. A good strategy in order to knock one out consistently is to have a tribe mate ride a Paracer with a platform saddle that has a cannon on it. You can then hit the Rock Elemental and have it chase you around while you are firing the cannon at it. If you do not have access to a Paracer or a tribe mate, you can be smart and build a wall around the Rock Elemental and trap it while you fire upon it safely.

If you are encountering a level thirty Rock Elemental, you will need to hit it with either 22 rockets, or 5 cannon shots. It highly prefers kibble that comes from the Mantis, in fact, using kibble will result in a taming time of about fifteen minutes. If you do not have access to this and want to make things that much more difficult for you, then you can use sulfur. It will take 300 units of sulfur for a taming time of about five hours. Clearly, it is extremely efficient to get the kibble in this case if you want to have a much easier time.

Once you have one tamed, the most obvious use for the Rock Elemental is that it is a crazy good tank. The Rock Elemental can only be damaged by explosive or armor piercing bullets, so when you are raiding an enemy base, it will take a lot of fire power to take one down. The Rock Elemental also has an extremely high base attack, which makes it perfect to either take down an enemy tribe’s walls, or to hunt other creatures. For example, the Rock Elemental can easily take down Death Worms with almost no risk if you level up damage and health. I definitely suggest that everyone has a Rock Ele on their team if they want to be a powerhouse on the server. Lastly, the Rock Elemental has the ability to collect almost any mineral on the map in addition to raw prime meat, sand, stone, and thatch.

The Rock Elemental is just the powerhouse of a creature that almost every tribe needs. Interestingly, there is a lot of inconsistencies when it comes to naming of the Rock Elemental. In the game files, it is referred to as the Rock Golem, and the saddle is even called the rock golem saddle. Also, no matter where you travel, if you have a Rock Elemental, almost no aggressive creature will attack it.

Wild: Colossus Petram is like no creature I have ever encountered. There is no biological or historical precedent for it. Its nearest relatives exist only in legend – mythical statues that could come to life like the Golem of Prague. That makes it all the more dangerous. What survivor could possibly expect a seemingly benign rock formation to suddenly spring to life and attack them? Fortunately, Colossus petram’s massive size makes it quite slow, so I would advise most survivors to flee immediately if encountering it in the wild.

Domesticated: If somehow tamed, Colossus petram could prove to be an invaluable asset, particularly in a siege. Only armor-piercing rounds or explosives can harm it at all, and it will handily smash through stone structures.

Known Information: Colossus petram survives by slowly absorbing nearby minerals while in its dormant state, which consequently means that its body contains a wealth of metal ingots. If undisturbed, it can maintain this hibernation ad infinitum, but it will viciously attack anyone who encroaches upon its territory. A solitary creature, Colossus petram lives alone, and will not even protect its own kind.