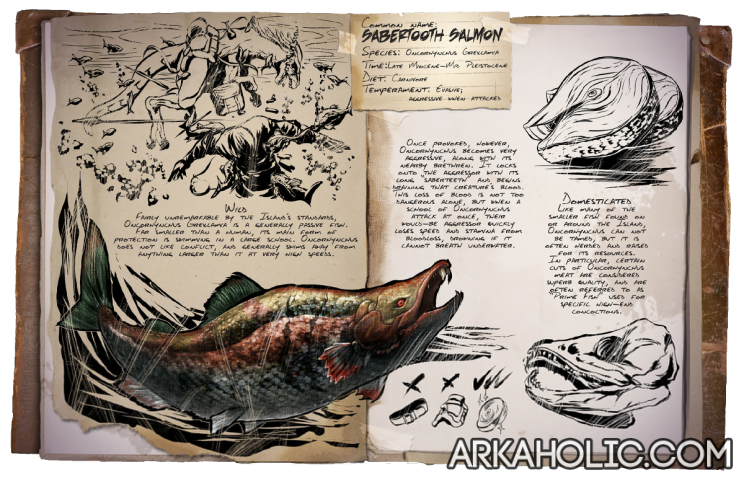 The Sabertooth Salmon will swim around the waters minding its own business until it encounters something else inside of its waters. If you find yourself in any sort of stream or river, you will most likely encounter some of these beasts. You are fine until you find yourself getting too close or attacking one, then they will start to rush towards you and attack you with all it’s got.

Note that these creatures generally like to stay together, so odds are if you see one, a bunch will be somewhere close by. They are most commonly found in any water source, but if you want to find the most of them, check the rivers in the central part of the island. Killing a Sabertooth Salmon will yield raw fish meat, and raw prime fish meat.

Since they are relatively easy to kill, players will find themselves killing these salmon as a way to level up, and gain a bunch of fish meat. The Sabertooth Salmon has a carrying weight of 32, meaning it can be picked up by Kaprosuchus, Megalosaurus, and Tusoteuthis.

Note that if you kill one of these beasts, you will need to use a sickle to harvest the raw prime meat from it. In case you weren’t familiar, you can craft a sickle by combining eighteen metal ingot, four wood, and sixteen hide in a smithy.

If you are a server admin, you can enter the following string into the console to spawn one in an instant: admincheat summon Salmon_Character_BP_C 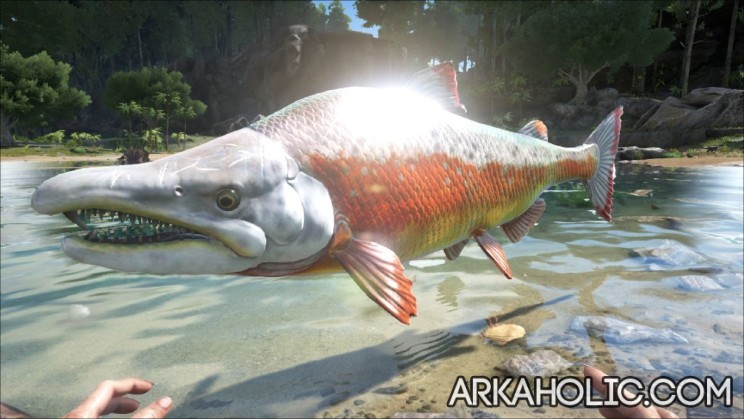 Although the Sabertooth Salmon does not have the ability to be tamed yet, there is still a lot of useful things that it can provide for you. First off, it is very weak so if you are just starting off, you can easily find a stream and kill a bunch of them to get some starting resources and to get some experience. There really isn’t anything special to killing them, you can easily stand by the sure and attack it with any sort of long ranged weapon to ensure you have the advantage. Note that if there are any salmon in the area, they will also become aggressive towards you since you are attacking one nearby.

If you find yourself in a tribe and want a whole bunch of fish meat, you can set up a little trap to capture them and farm them for meat. To do this, I recommend trapping off a section of a river with either a wall, or a dinosaur gate. Once you do this, they will spawn and have nowhere to go, so you can easily kill a bunch of them at a time and gather all of the meat in an instant.

This is a great way to farm up some raw prime fish meat and standard fish meat for taming other creatures. There is a limit as to how many salmon can be in one area, so be sure to check on your traps every so often to make sure they don’t pile up too much.

I wouldn’t worry too much about them putting up a fight, as long as you are not in deep waters. If you are in a river, even if you agro a bunch of the salmon, you can easily go onto land in order to escape them. If you are in deeper waters, you might find yourself in a sticky situation if you are taking on more than you can handle. They die in just one or two hits with almost any ranged weapon, again making them a great early dinosaur for new players to kill and gain some levels off of.

Interestingly, Sabertooth Salmon can spawn in all different sizes and colors. This is similar to other aquatic animals such as the Coelacanth. The Sabertooth Salmon resemble modern day salmon minus the fangs that these guys have. In real life, a Sabertooth Salmon could reach lengths of up to six feet and take down some of the toughest aquatic dinosaurs.

Wild: Fairly unremarkable by the Island’s standards, Oncorhynchus Grexlamia is a generally passive fish. Far smaller than a human, its main form of protection is swimming in a large school. Oncorhynchus does not like conflict, and generally swims away from anything larger than it at very high speeds.

Domesticated: Like many of the smaller fish found on or around the Island, Oncorhynchus can not be tamed, but it is often herded and raised for its resources. In particular, certain cuts of Oncorhynchus meat are considered superb quality, and are often referred to as “Prime Fish” used for specific high-end concoctions.

Known Information: Once provoked, however, Oncorhynchus becomes very aggressive along with its nearby brethren. It locks onto the aggressor with its long “saberteeth” and begins draining that creature’s blood. This loss of blood is not too dangerous alone, but when a school of Oncorhynchus attack at once, their would-be aggressor quickly loses speed and stamina from bloodloss, drowning if it cannot breath underwater.