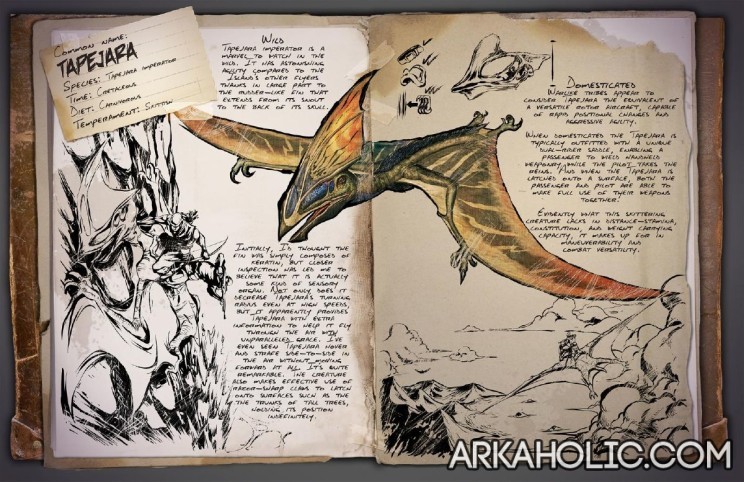 The Tapejara is typically found flying over the southern regions on the island. Approach a Tapejara with caution because as soon as it sense any sort of danger, it will instantly begin to flee. The Tapejara is one of the more unique birds on the island due to its ability to fly quickly and carry multiple passengers.

Killing a Tapejara will yield hide and raw meat. The Tapejara has a carrying weight of about 150, which means that it can only be carried by a Megalosaurus. You will need a saddle to ride one, you can craft one at level fifty. The Tapejara will produce small sized feces and has a preferred food of raw mutton.

If you have your own server, you can spawn a Tapejara on common by entering the following string in the console: admincheat summon Tapejara_Character_BP_C

How to Tame & Ride The Tapejara

In order to knock one easily, here are a few tips to help you with this adventure. Since they are super skittish, they will run as soon as they sense you approaching them. The first thing you can do to get one to stay still for you to knock it out is to use traps. You use the following traps to immobilize it: bola trap, chain bola trap, bear trap, large bear trap, or a plant species y trap. These will allow you to trap it so it cannot fly away from you.

Alternatively, you can use a ghillie suit to increase your sneaking ability and get closer to it before it flies away. Another great method to getting one to not be skittish is to use a Pachyrhinosaurus to use its rage toxin on it so it will attack you. Once it has started attacking you, it will not fly away and you can easily knock it out to tame it. 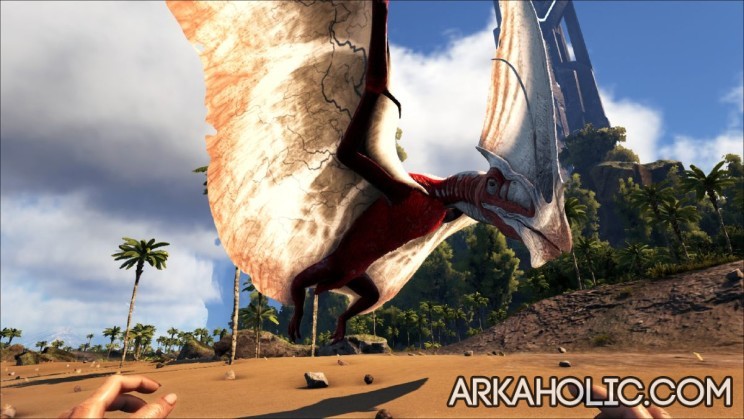 The Tapejara highly prefers kibble that is made from an Allosaurus Egg. If you do not have this kibbe, you can also use raw mutton, cooked lamb chops, or raw prime meat to use once it is knocked out. The most efficient resource to use is raw mutton, in which cause it will take seven units and a total taming time of about 20 minutes to complete. To knock one out, you will need to hit it with a sling shot 51 times, tranquilizer arrow fourteen times, or tranquilizer dart six times.

Once you have one properly tamed, the Tapejara will provide your tribe with a lot of great skills. The first thing that it can provide you with is having the ability to fly up to two passengers with a regular saddle. This makes the Tapejara a great transport animal in the sense that you can carry multiple people either to battle another tribe, or when moving your base to another location. It is a great war bird because it can carry two passengers who can both use their weapons while you are flying. This means you can shoot down at enemies while having a high angle and not have to worry about getting hit easily. The Tapejara is an all around great mount to have when you are trying to tame additional dinos. This is because you can have people shooting from the saddle so it can chase skittish creatures, or carry some to a taming box.

The Tapejara can carry the following creatures: Compy, Dilo, Diplocaulus, Dodo, Jerboa, Kairuku, Mesopithecus, Pegomastax, Titanomyrma, Trodons, and of course, people. You’ll find that having the ability to carry all of these different creatures will make it a great mount for being able to help tame these creatures and more. Again, if you do not have a Tapejara on your team, I definitely recommend your tribe investing in the necessary resources to tame one now!

Wild: Tapejara Imperator is a marvel to watch in the wild. It has astonishing agility compared to the Island’s other flyers thanks in large part to the rudder-like fin that extends from its snout to the back of its skull.

Domesticated: Warlike tribes appear to consider Tapejara the equivalent of a versatile rotor aircraft, capable of rapid positional changes and aggressive agility. When domesticated the Tapejara is typically outfitted with a unique dual-rider saddle, enabling a passenger to wield handheld weaponry while the pilot takes the reins. And when the Tapejara is latched onto a surface, both the passenger and pilot are able to make full use of their weapons together. Evidently what this skittering creature lacks in distance-stamina, constitution, and weight carrying capacity, it makes up for in maneuverability and combat versatility.

Known Information: Initially, I’d thought the fin was simply composed of keratin, but closer inspection has led me to believe that it is actually some kind of sensory organ. Not only, does it decrease Tapejara’s turning radius even at high speeds, but it apparently provides Tapejara with extra information to help it fly through the air with unparalleled grace. I’ve even seen Tapejara hover and strafe side-to-side in the air without moving forward at all. It’s quite remarkable. The creature also makes effective use of razor-sharp claws to latch onto surfaces such as the trunks of tall trees, holding its position indefinitely