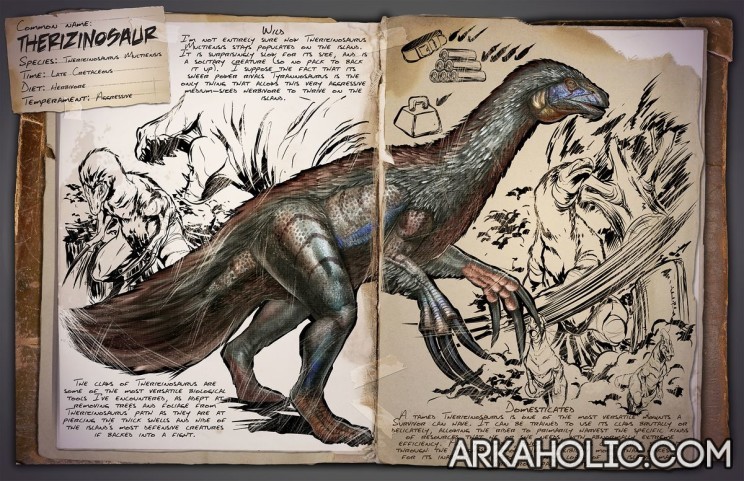 The Therizinosaurus is an extremely aggressive dinosaur that often roams around the southern regions of the island on its own. It will attack almost any creature that steps too close to it on sight. These guys are no joke, they have been known to take down some of the biggest and baddest creatures on the island. Killing one of these monsters will not on yield a ton of experience, but also hide, keratin, raw meat, and raw prime meat.

If you want to breed one of these guys, you will need to keep the egg in an environment that is between 25 and 30 degrees Celcius and will take between 2 and 5 days but is most definitely worth it.

If you are the admin of a server, you can spawn one of these creatures in by entering the following into the console: admincheat summon Therizino_Character_BP_C 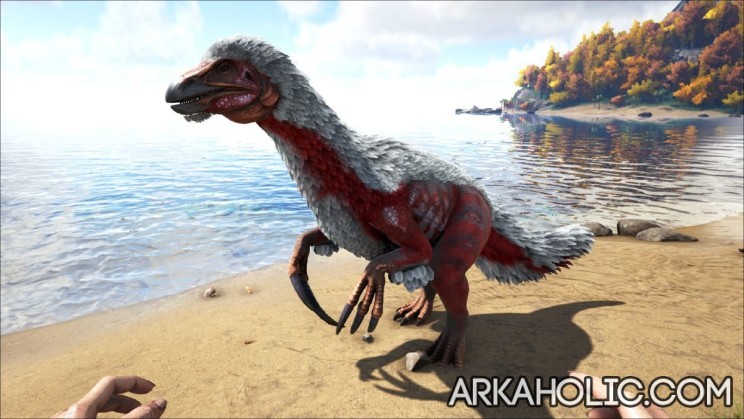 How to Tame and Ride a Therizinosaurus

When you are trying to knock one of these guys out, keep in mind that they do a ton of damage. The best way to go about knocking them out safely is to have a flying mount that is capable of carrying passengers that can hold weapons, so that way you can fly safely above it and shoot down upon it without it being able to hit you. This is without a doubt the best way to knock it out because it avoids the possibility that it just kills you and your crew. Note that you can also immobilize one by using a chain bola trap, large bear trap, or a plant species y trap.

If you are encountering a level thirty one, you are best off feeding it kibble from a Megalosaurus egg to tame it. This would only require 15 units of kibble, 400 narcoberries, for a total taming time of about an hour and fifteen minutes. If you do not have this kibble available, be in for a super long taming time. You’ll need about 150 vegetables and 1,400 narcoberries for a total taming time of about four hours. I definitely suggest investing the resources to acquire the kibble because it will save you a ton of time and get you that much closer to having one for your tribe a lot sooner.

The next best thing that this creature can do for you is gather resources. You can actually upgrade its harvesting abilities by spending a skill point. This creature is extremely efficient (one of the best in the game) at collecting almost any resource in the game. It can harvest: wood, chitin, rare flower, keratin, hide, silk, cactus sap, plant species y seeds, fiber, rare mushrooms, organic polymer, berries, thatch, and raw prime meat at the most efficient levels in the game. Upgrading its harvesting abilities will make it harvest these resources at an even better pace. I definitely recommend having one of these guys dedicated to collecting resources, you definitely will not regret it.

Wild: I’m not entirely sure how Therizinosaurus multiensis stays populated on the island. It is surprisingly slow for its size, and is a solitary creature (so no pack to back it up). I suppose the fact that its sheer power rivals Tyrannosaurus is the only thing that allows this very aggressive medium-sized herbivore to thrive on the island.

Domesticated: A tamed Therizinosaurus is one of the most versatile mounts a survivor can have. It can be trained to use its claws brutally or delicately, allowing the rider to primarily harvest the specific kinds of resource that he or she needs, with abnormally extreme efficiency. And in combat, these same claws can pierce straight through the toughest armor. This flexibility more than makes up for its inability to carry the large loads of the island’s many herbivorous pack beasts.

Known Information: The claws of Therizinosaurus are some of the most versatile biological tools I’ve encountered, as adept at removing trees and foliage from Therizinosaurus’ path as they are at piercing the thick shells and hide of the island’s most defensive creatures if backed into a fight.