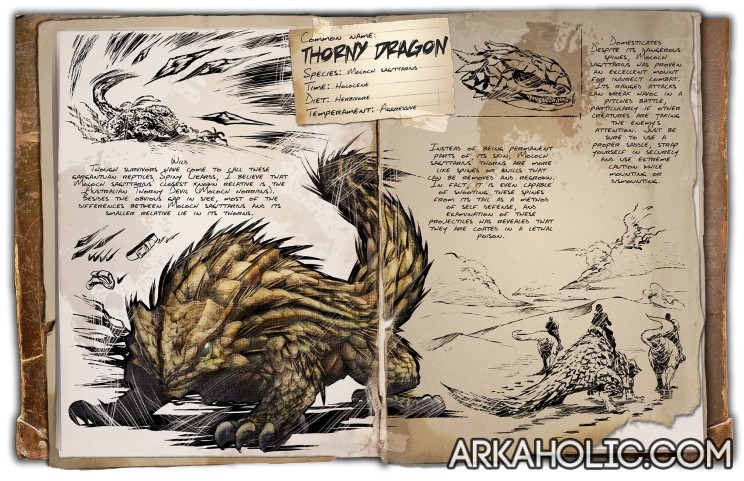 The Thorny Dragon is an extremely aggressive creature that will attack anything smaller than it when they approach too close. It will avoid any bigger creatures and carnivores, and will not hesitate to attack a human. Be careful when you approach one because it has a close ranged bite attack that does a bit of damage, and a ranged attack where it turns around and launches its quills at you. The ranged attack will inflict a bit of torpor, as well as a stamina drain.

The Thorny Dragon is most commonly found in the Bad Lands area of the Scorched Earth map. Killing one has the chance to yield either hide, keratin, or raw meat. It has a medium sized fees and a carrying weight of 150. This means that the Megalosaurus, Quetzal, Tusoteuthis, and the Wyvern have the ability to carry it. It can also be immobilized by the bola trap, chain bola, bear trap, large bear trap, and the plant species y trap. It can damage wood and thatch so it is not much of a threat to tribes that have anything stronger than that. It highly prefers kibble that comes from the Camelsaurus and requires a level 40 Thorny Dragon Saddle in order to ride it.

If you are interested in breeding the Thorny Dragon, you can do so by collecting a Thorny Dragon Egg and keeping it in an incubation room that is between 20 and 30 degrees Celsius. From start to finish, it should take a total time of about two days till it is completed. If you keep doing this, you’ll have a ton of great wood gathering machines that will help your tribe immensely.

If you are the admin of a server, you can spawn a Thorny Dragon on command by entering the following into the console: admincheat summon SpineyLizard_Character_BP_C 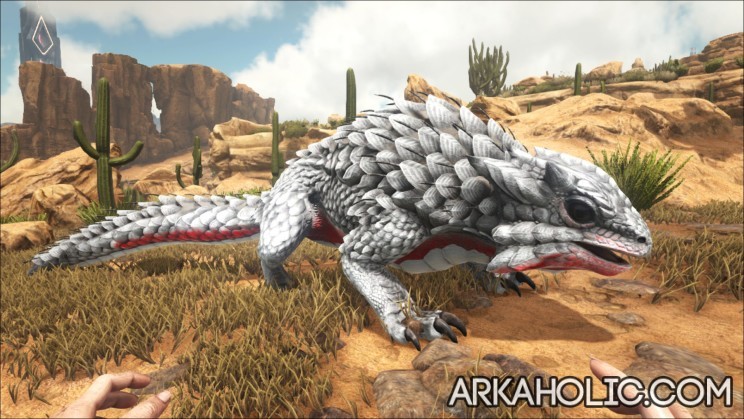 How to Tame, Ride & Breed a Thorny Dragon

The general strategy in order to knock one of these guys out is to get the high ground if you are by yourself. You can easily climb up on top of a rock and shoot down on it so that it cannot hit you. The Thorny Dragon will almost always be faster than you, so you cannot really run backwards and shoot at it at the same time. If you having a flying mount with a platform saddle, you can easily knock it out with this with almost no risk of getting any damage dealt to you.

If you are encountering a level 30 one, it will take either 51 hits with a slingshot, 14 hits with a tranquilizer arrow, or 6 shots with a tranquilizer dart in order to knock it out. It highly prefers kibble that comes from a Camelsaurus Egg, which will take a total taming time of about a half hour. Interestingly, you can use Raw Mutton as its next preferred food for a taming time of almost twenty minutes. It will only require 12 units of the mutton and will take less time and resources than the kibble. If you have an excess of the mutton, I most definitely recommend using it.

Once you have one tamed, the Thorny Dragon has the amazing ability to gather wood at the most efficient pace on the map. It also has the unique ability to carry wood, thatch, fiber, and stone at a significantly reduced weight. Another amazing ability that the Thorny Dragon has to offer any tribe is that it can act as a mobile Smithy. You can use it as a smithy by equipping a saddle to it and then opening up the saddle menu. You can even increase the rate at which it crafts things by feeding it focal chili. The Thorny Dragon can even be bred to be a mobile battle unit. If you level up health and damage, the Thorny Dragon can do amazing in combat with almost any creature of its size. This is partly because its ranged attack has the ability to hit multiple enemies at a time.

Another trait that the Thorny Dragon possesses is that it can be used as a mobile ballista. It can easily shoot its quills at a decently long range to help you while you are invading an enemy tribe. It can also be used to help tame other dinosaurs because as you level it up, you can get its attack high enough to inflict a ton of torpor at a quick pace. It’s super useful for helping in taming things that are a lower level than the Dragon you have.

Wild: Tough survivors have come to call these Gargantuan reptiles Spiny Lizards, I believe that Moloch sagittarius’ closest known relative is the Australian Thorny Devil (Moloch horridus). Besides the obvious gap in size, most of the differences between Moloch sagittarius and its smaller relative lie in its thorns.

Domesticated: Despite its dangerous spines, Moloch sagittarius has proven an excellent mount for indirect combat. Its ranged attacks can wreak havoc in a pitched battle, particularly if other creatures are taking the enemy’s attention. Just be sure to use a proper saddle, strap yourself in securely, and use extreme caution while mounting or dismounting.

Known Information: Instead of being permanent parts of its skin, Moloch sagittarius’ thorns are more like spines or quills that can be removed and regrown. In fact, it is even capable of shooting these spines from its tail as a method of self defense, and examination of these projectiles has revealed that they are coated in a lethal poison.