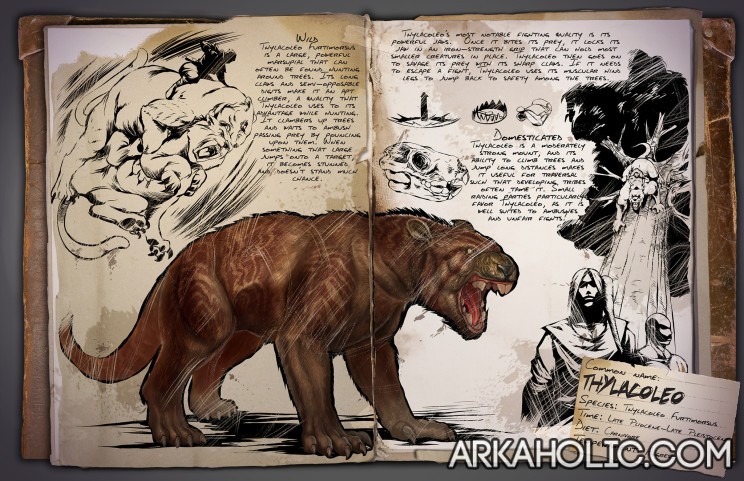 The Thylacoleo is very agile and has the ability to climb up trees and cliffs with a breeze. It is fairly aggressive, so even coming to close to it will make it come towards you and attack. The Thylacoleo comes in all shapes and sizes, with the rarest color being an all white variation. The Thylacoleo is tamed through conventional knocking out methods, and prefers kibble that comes from the Titanoboa Egg.

The Thylacoleo has a carrying weight of 180, which means it can be picked up by the Quetzal, Tusoteuthis, and the Wyvern. It produces medium sized feces and has the possibility of dropping Hide, Keratin, and Raw Meat when killed. In order to ride one, it requires a level fifty Thylacoleo Saddle. Killing one will yield five experience per level of the Thylacoleo. It is most commonly found in the Redwood Forest region of the island and the Badlands region on the Scorched Earth map.

If you are the admin of a server, you can spawn a Thylacoleo on command by entering the following into the console: admincheat summon Thylacoleo_Character_BP_C 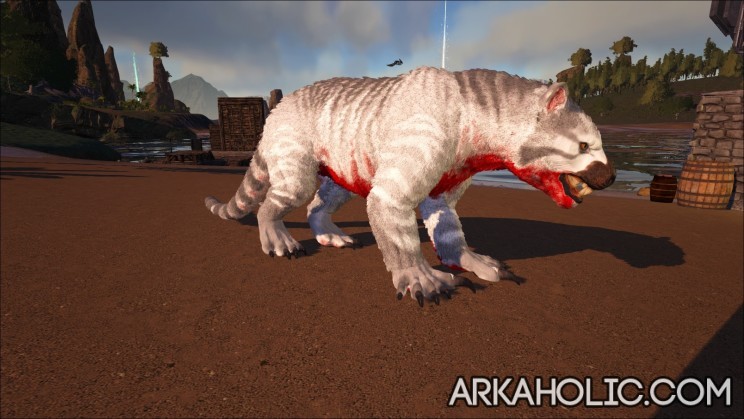 How to Tame, Ride & Breed a Thylacoleo

The best way to knock out a Thylacoleo is to keep a safe distance from it. If you see one high up in a tree, I recommend avoiding it at all costs as it gains a special attack bonus when it is up in a tree. If you can, find one that is down on the ground and begin shooting at it with darts from a distance. If you have the means, you should approach it on a mount and shoot down on it from above, so that you can avoid all of its attacks.

Once you have one tamed, the Thylacoleo can provide a decent amount of utility for your tribe. First things first, the Thylacoleo is a great travel campaign. It has a high sprinting speed coupled with a large stamina pool. On top of that, it has the ability to climb every surface in the game, even vertical ones. This applies to both natural structures and ones that have been built by players. On top of that, it deals a ton of damage and has a naturally high amount of health, making it the perfect mount to take into battle.

This is definitely a creature worth taming if you plan on fighting against other tribes on your server. Not only because it can climb any surface, but because of how fast and how much damage it can deal. One unique thing about the Thylacoleo is that you can “park” it and it will remain exactly where you left it. This is a unique feature and comes it really helpful when you are either invading another tribe and need to get off your mount, of for your own base. You can leave some Thylacoleos in a garage sort of structure and have them ready in case you are being invaded by any neighboring tribes.

Wild: Thylacoleo furtimorsus is a large, powerful marsupial that can often be found hunting around trees. Its long claws and semi-opposable digits make it an apt climber, a quality that Thylacoleo uses to its advantage while hunting. It clambers up trees and waits to ambush passing prey by pouncing upon them. When something that large jumps onto a target, it becomes stunned and doesn’t stand much chance.

Domesticated: Thylacoleo is a moderately strong mount, and its ability to climb trees makes it useful for traversal such that developing tribes often tame it. Small raiding parties particularly favor Thylacoleo, as it is well suited to ambushes and unfair fights!

Known Information: Thylacoleo’s most notable fighting quality is its powerful jaws. Once it bites its prey, it locks its jaw in an iron-strength grip that can hold most smaller creatures in place. Thylacoleo then goes on to savage its prey with its sharp claws. If it needs to escape a fight, Thylacoleo uses its muscular hind legs to jump back to safety among the trees.