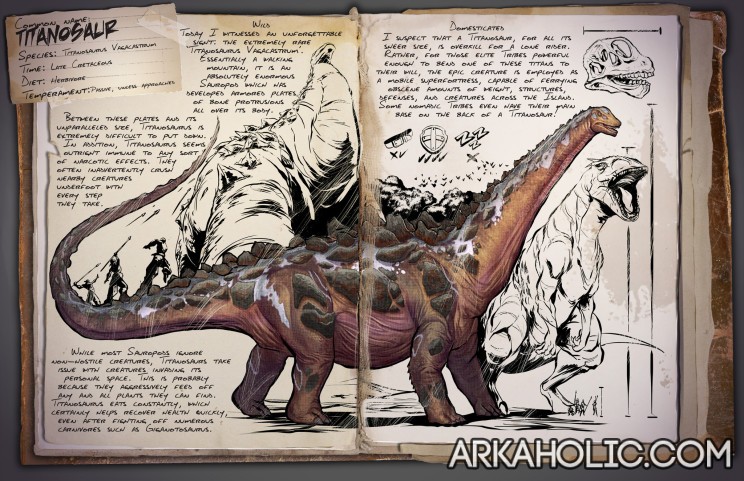 The Titanosaur is one of the most peaceful dinosaurs on the island. It will lazily walk around chewing on vegetation and minding its own business even if it is approached by a person. It will lazily graze around and knock down trees or whatever else is in its path until it is threatened. If you attack a Titanosaur, be prepared for one heck of a fight as they turn from peaceful to extremely destructive.

The Titanosaur is most commonly found in the southern regions of the island. It cannot be picked up by any mount in the game as of yet. It requires a level 85 saddle to ride and produces massive feces size. Killing one of these monsters will yield hide, raw meat, raw prime meat, and sauropod vertebra. The Titanosaur cannot be immobilized by any sort of trap, so you will have to knock it out the old fashioned way if you wish to tame one.

If you do manage to kill one, you will be rewarded with a ton of experience. Once tamed, the Titanosaur has the ability to damage almost any type of structural material, this includes thatch, wood, adobe, stone, and metal.

If you are the admin of a server, you can spawn a Titanosaur by entering the following into the console: admincheat summon Titanosaur_Character_BP_C 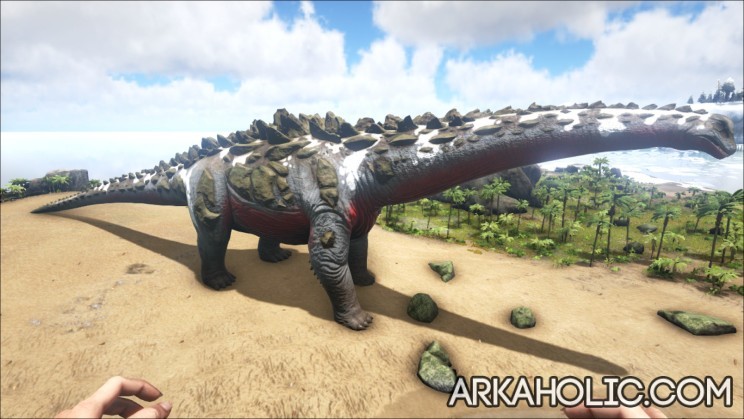 How to Tame & Ride the Titanosaur

Now when you are thinking about taming one of these monsters, know that they are a very special circumstance. For example, if you are playing on an official game server, only three Titanosaurs can exist at any given time. They cannot be fed while they are tamed, so it will only be a matter of time until they decide they do not wish to server you any longer.

To tame one of these guys, you will not feed them or do any sort of conventional means, you will need to literally knock it out with a special weapon. The following weapons are the best for taking down a level thirty Titanosaur: Primitive Cannon, Rocket Turret, Ballisata Turret, or Catapult Turret. You will need to aim for the head in order to knock it out, and the time it takes to knock one of these guys out can range from a couple of minutes to an hour depending upon what resources you have. A primitive cannon will be the most efficient way to knock one out, but the others will work as well if you have more time and more of that resource available.

If you want a strategy in order to knock one out in the most efficient way, I suggest shooting cannon balls directly at its head. This applies the most torpor and will result in the quickest type of knock out. You will only need to aim for the head otherwise you run the risk of wasting a ton of resources, and not even knocking it out. You will need at least two people attacking the monster at the same time so that it does not lose its aggression towards you while you are reloading. When you enrage it, it will instantly go into a frenzy and start destroying everything in its sight. It can take down every dinosaur on the island except for Gigantosaurus. If you have a Quetzal you can build a platform saddle to gain the height advantage to shoot it without it being able to hit you.

If you are on a private server, odds are you will be able to feed one so you can keep it for longer. You will need to check with a server admin to see if this is true, but if it is you can feed it kibble from a Carbonemys egg, vegetables, mejoberries, or regular berries.

Once you have one tamed and ready at your side, it is the best raid boss monster on the island. You can easily go into an enemy tribe’s base and destroy almost anything that exists there. You can smash through metal foundations in about ten attacks. The Titanosaur has a ton of health and will not be damaged by Plant Species turrets or Auto turrets, rendering most of the enemies bases defense useless. Any enemy that gets raided with a Titanosaur is doomed and will not stand a chance because it is almost impossible to take down one of these guys.

Wild: Today I witnessed an unforgettable sight: the extremely rare Titanosaurus Vagacastrum. Essentially a walking mountain, it is an absolutely enormous sauropod which has developed armored plates of bone protrusions all over its body.

Domesticated: I suspect that a Titanosaur, for all its sheer size, is overkill for a lone rider. Rather, for those elite tribes powerful enough to bend one of these titans to their will, the epic creature is employed as a mobile superfortress, capable of ferrying obscene amounts of weight, structures, defenses, and creatures across the island. Some nomadic tribes even have their main base on the back of a Titanosaur!

Known Information: Between these plates and its unparalled size, Titanosaurus is extremely difficult to put down. In addition, Titanosaurus seems outright immune to any sort of narcotic effects. They often inadvertently crush nearby creature underfoot with every step they take. While most sauropods ignore non-hostile creatures, Titanosaurs take issue with creatures invading its personal space. This is probably because they aggressively feed off any and all plants they can find. Titanosaurus eats constantly, which certainly helps recover health quickly, even after fighting off numerous carnivores such as Giganotosaurus.