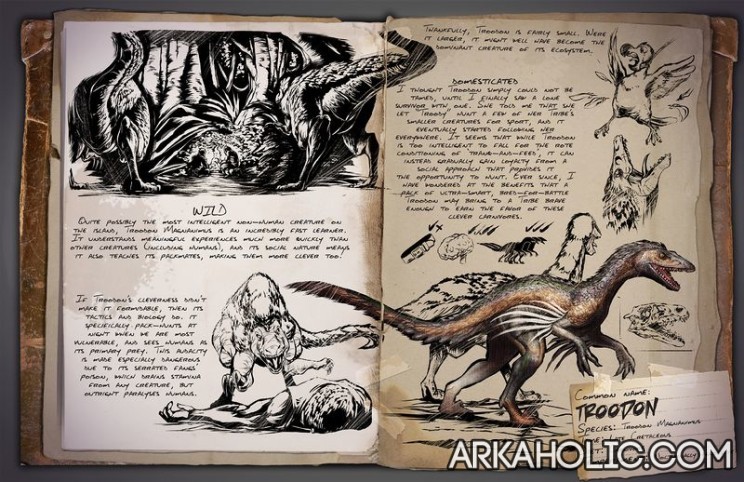 The Troodon is a hyper aggressive animal but has a very small agro range, meaning you will have to get extremely close to it in order for it to become aggressive towards you. Be cautious as once you get close to it, the Troodon will send out an alert to all other Troodons in the area which will bring them towards you to attack you. These are creatures you do not want to mess around with if you are a newly formed tribe. You’ll need some resources before you can go off and mess with these guys.

The Troodon can most commonly be found in the southern areas on the island and in the bad lands area of the scorched earth map. The Troodon is tamed passively and produces small feces. It has a carrying weight of 35 which means the following creatures can pick it up and transport it: Kaprosuchus, Megalosaurus, Tapejara, Pteranodon, Argentavis, Quetzal, Tusoteuthis, and Wyvern. They can be immobilized if you use a bola trap, bear trap, or a plant species y trap. They can only damage thatch structures with their attacks and if you kill one, they can drop hide, raw meat, or Nerdry Glasses.

The Troodon produces Troodon Eggs which can be incubated in a 30 degree Celsius room and hatched into a baby. From the time it is a baby, it will take approximately 21 hours until it is a full grown Troodon.

If you are the admin of a server, you can type in the following in the console to spawn a Troodon on site: admincheat summon Troodon_Character_BP_C

How to Tame a Troodon

Taming a Troodon is a unique experience because it is passively tamed. You must tame dinosaurs and bring them to the Troodon to kill in order to fill its taming bar. The best way to do this is to already have your mount be low health and allow the Troodon to attack it to get the killing blow. There is a certain threshold of experience that the Troodon must obtain before you can claim it as your own.

It is unknown exactly how this is calculated, but the stronger the dinosaur that it kills, the more experience it will be granted. Do not try to tames these guys at night because I have seen that you receive significantly reduced experience when giving them sacrifices at night, this may be because they get buffs at night time but I am unsure of the complete interaction.

Once you manage to have one tamed, you will soon see that the Troodon is an excellent night hunter. At night, the Troodon’s eyes will light up which will give it a huge movement speed buff and attack buff. Similar to the Compy, the Troodon will also gain additional buffs for being in a pack. Couple the pack bonus with the night time bonus and you have yourself a killing machine that can take down almost anything at night time. This is perfect if you want to engage another tribe at night as you will have a huge advantage.

Another big thing that the Troodon can offer is that it has scouting abilities. When you open up the menu on the Troodon, you will see that it has a scout ability. This ability allows it to reveal the location of the nearest valid unit within a certain distance. This can be either players, traps, wild creatures, or many other things.  You can spend points to improve scouting which will reduce the cooldown of the ability and grant a larger vision radius. This skill is obviously amazing because it can help you find where your enemies are hiding and give you a huge advantage when planning on raiding them. No tribe will ever suspect where you are coming from if you have one of these guys in your tribe!

Wild: Quite possibly the most intelligent non-human creature on the island, Troodon magnanimus is an incredibly fast learner. It understands meaningful experiences much more quickly than other creatures (including humans), and its social nature means it also teaches its packmates, making them more clever too!

Domesticated: I thought Troodon simply could not be tamed, until I finally saw a lone survivor with one. She told me that she let “Troody” hunt a few of her tribe’s smaller creatures for sport, and it eventually started following her everywhere. It seems that while Troodon is too intelligent to fall for the rote conditioning of ‘tranq-and-feed’, it can instead gradually gain loyalty from a social approach that provides it the opportunity to hunt. Ever since, I have wondered at the benefits that a pack of ultra-smart, bred-for-battle Troodon may bring to a tribe brave enough to earn the favor of these clever carnivores.

Known Information: If Troodon’s cleverness didn’t make it formidable, then its tactics and biology do. It specifically pack-hunts at night when we are most vulnerable, and sees humans as its primary prey. This audacity is especially dangerous due to its serrated fangs’ poison, which drains stamina from any creature, but outright paralyses humans. Thankfully, Troodon is fairly small. Were it larger, it might well have become the dominant creature of its ecosystem.