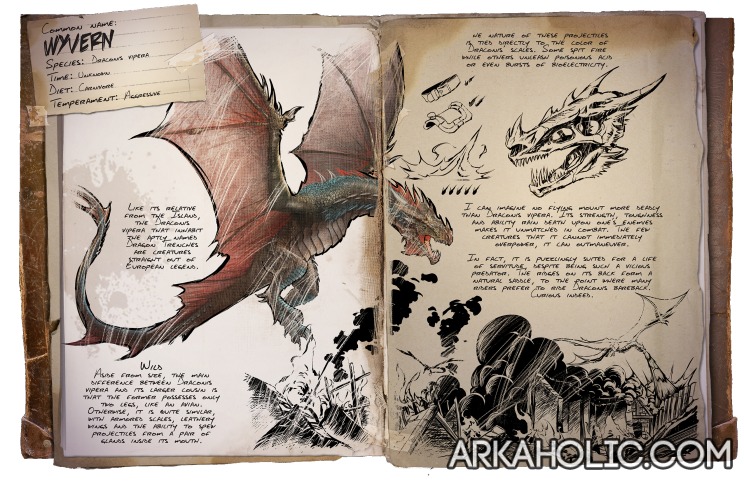 The Wyvern is an extremely aggressive creature that is often found in the World Scar region of the scorched earth map. It is a dragon like creature that will not back down from a fight regardless of who it is facing. If you come too close to its territory, the Wyvern will immediately try and chase you away and then resume its activity when you are far enough gone.

Whenever you manage to take down one of these dragons, it has the chance to drop Hide, Raw Prime Meat, Sulfur, or a Fire Talon. A Fire Talon is a special item that is needed in order to spawn the boss of the Scorched Earth map. The Wyvern will drop medium sized feces and has a carrying weight of 560, which means it cannot be picked up by any creature on the map. It can be immobilized with a chain bola trap, or a large bear trap. It has the ability to damage thatch and wood structures, and drops Wyvern Eggs. You can also equip it with a special Wyvern Bone Costume to change its appearance.

If you are the admin of a server, you can spawn a Wyvern by typing the following into the console: admincheat summon Wyvern_Character_BP_Base_C 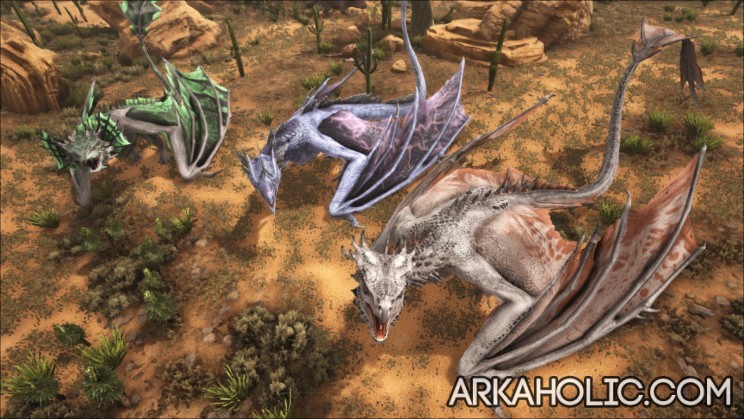 How to Ride & Breed a Wyvern

You can spawn any variant, by replacing the word “base” with either Fire, Lightning, or Poison.

So since Wyverns cannot be tamed, the only way you can have your own is to collect eggs and raise them. You will need to either gather Fire Eggs, Lightning Eggs, or Poison Eggs. Once you have them, you will need to keep them in a room that is between 80 and 90 degrees Celsius. The egg has a five hour incubation period, after which an additional 100 hours will be needed to raise it to a full grown adult.

Once the egg has hatched, you will need to craft Wyvern Milk to feed them. You can make this by knocking out a female Wyvern and taking the milk from its inventory. A baby Wyvern will require 1 unit of food every 10 seconds, which means that 1 unit of milk will last for about 3 hours. You will definitely need to stay on top of things when raising a baby Wyvern, as they require a lot of attention. It will definitely pay for itself in the long run as they provide a ton of utility for you and your tribe.

The first useful thing that the Wyvern can do for you is it can collect Cactus Sap, Thatch, and Wood at an extremely efficient pace. They are extremely good at it and cannot be matched by any other creature on the island. Secondly, the Wyvern is an excellent war mount. They are very fast and have a ton of stamina. They have great long ranged breathe attacks that can take down almost anything. On top of that, the ranged attack can be shot downwards toward ground making it impossible for land units to hit you.

You can also pick up a ton of different creatures, which means that the Wyvern is the perfect taming mount. I definitely recommend having one of these creatures if you want a great taming mount that can easily pick up and drop off almost any creature on the Scorched Earth map. I definitely think that the Wyvern is THE most important creature on the Scorched Earth map for any tribe that wants to either take over their map, or be one of the most powerful tribes on the server. I cannot recommend enough putting in the effort to tame one of these monsters.

Wild: Aside from size, the main difference between Draconis vipera and its larger cousin is that the former possesses only two legs, like an avian. Otherwise, it is quite similar, with armored scales, leathery wings, and the ability to spew projectiles from a pair of glands inside its mouth. The nature of these projectiles is tied directly to the color of Draconis’ scales. Some spit fire while others unleash poisonous acid or even bursts of bioelectricity.

Known Information: Like its relative from the island, the Draconis vipera that inhabit the aptly named Dragon Trenches are creatures straight out of European legend